A Chinese Buddhist Temple next to the Chao Phraya River

If you’ve ever traveled by boat on the Chao Phraya River you will probably have noticed an attractive pagoda on the opposite bank to Chinatown. The pagoda is part of the Che Chin Khor Temple complex on the grounds of the Moral Uplifting Society. It’s a Mahayana Buddhist temple which fuses Chinese & Thai architectural styles to create a unique place of worship. 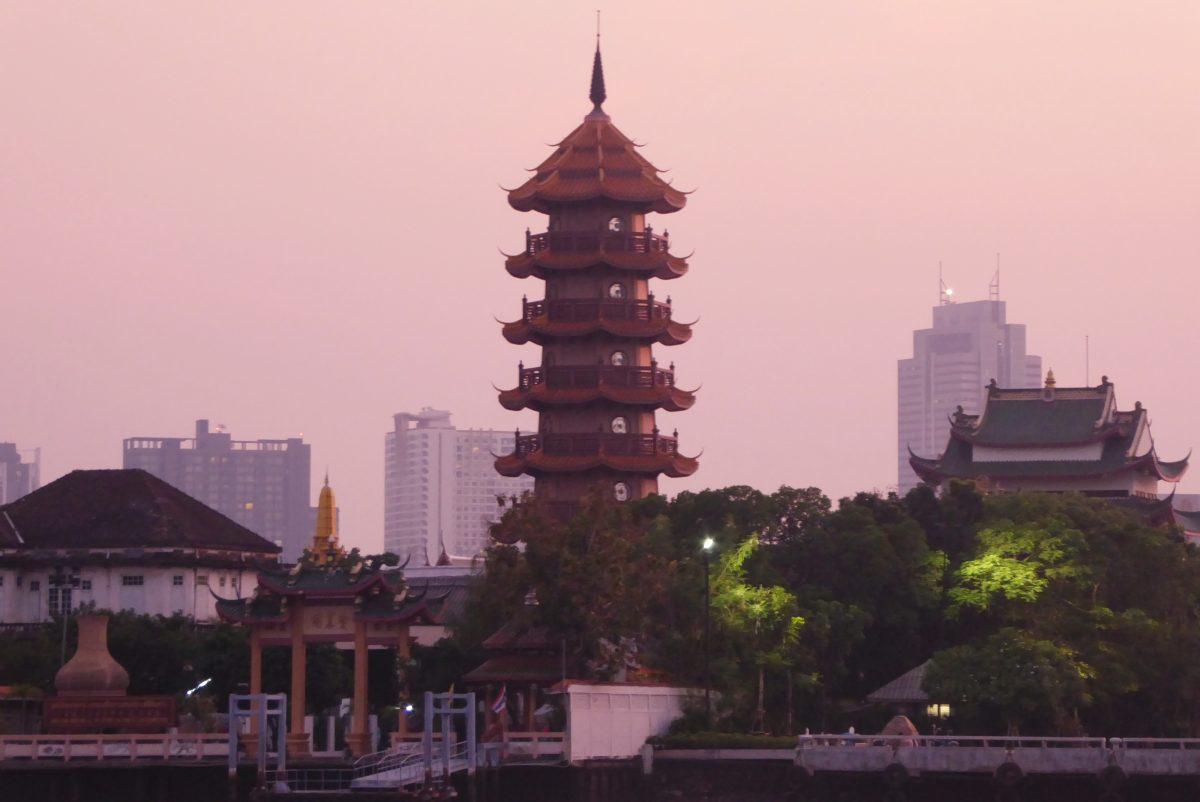 sunset view from the river

The Moral Uplifting Society is a body dedicated to the promotion of moral values and charitable activities. The society provides free rice, blankets & coffins to the poor as well as student lunches to disadvantaged children. Che Chin Khor Temple was founded in 1953 and the opening ceremony presided over by King Rama IX. A new Devi Vihara (hall of worship) opened in 1988 with the pagoda added in 2001. A new building behind & connected to the main building opened in 2018. 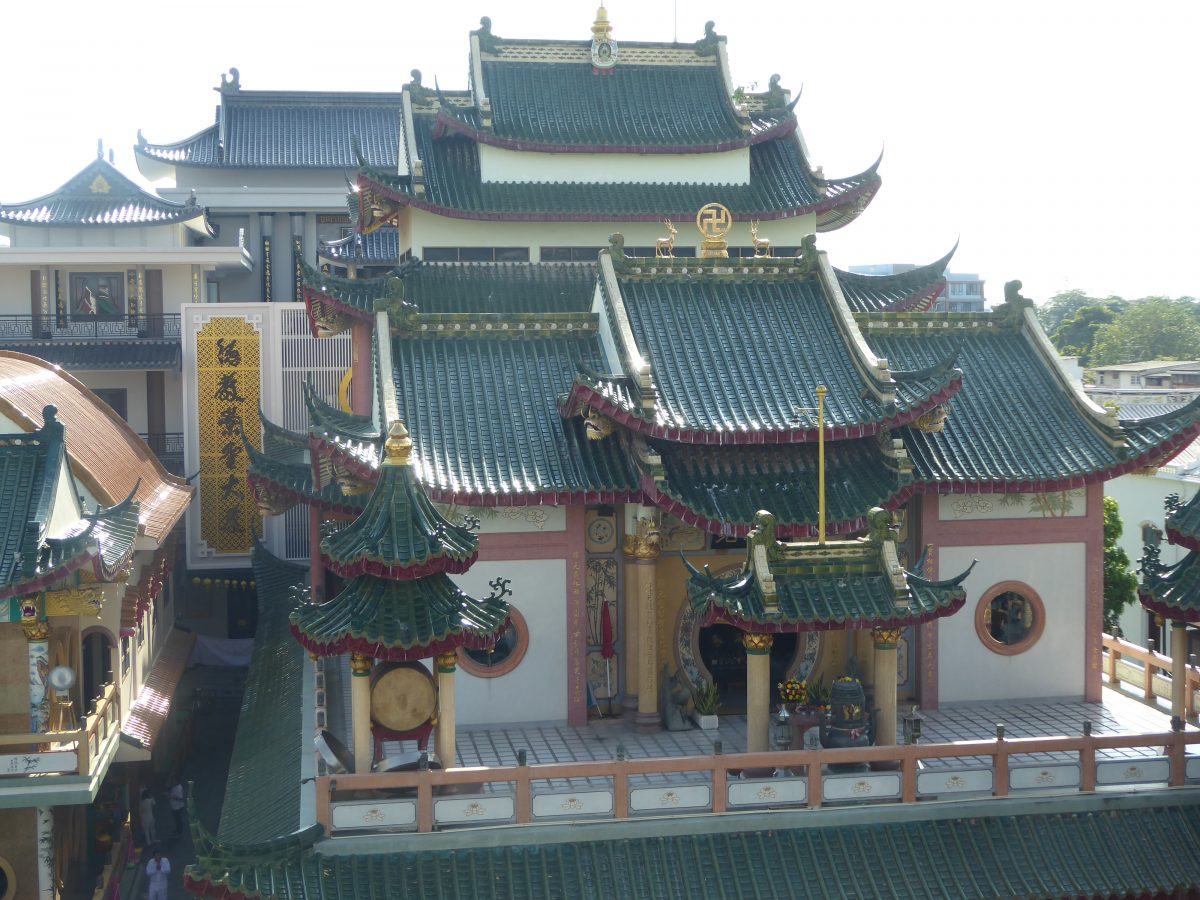 The main temple building’s architecture is a mixture of Thai Buddhist art and classical Chinese style. There are three floors with two connected buildings. There are several shrines within the building, each in a distinctive style & featuring various Chinese & Thai religious images. The walls & ceiling are superbly crafted in colorful detail.  On the ground floor is a fat “laughing Buddha” image. The “Budai” is a famous Chinese monk worshiped as a deity by Chinese Buddhists and can be found in temples all over Thailand. Behind Budai are images of four Chinese sages (philosophers). A stairway leads up to the second floor which resembles the interior of a cave. Inside are more bronze images of sages representing Taoism, Confucianism, & Buddhism.

Outside is a terrace with a bell tower and drum. Behind is the new second building connected by a walkway. Here you will find a standing Buddha flanked by two Chinese deities. Another stairway leads to the highest level where another deity sits on a throne. On the ground floor, there is an ornately gold & black decorated door leading to a Butsudan room. The room is for paying respect to people who have died. The Chinese sign above the door translates to “temple for seeking entrance to heaven”. Inside, the wall features nameplates in remembrance of the dead. Families of the dead come here to pay their respects.

The most prominent feature of Che Chin Khor Temple is the pagoda, eight floors with different deities on each floor and a panoramic view of the Chao Phraya River at the top. The pagodas official name is Mahathat Chedi Prajonchatri Thai-Chin Charoen. The interior features granite & bronze with engraved hexagon shaped windows. A climb to the top of the pagoda rewards with views of the Chao Phraya River & the city of Bangkok. On the second floor is an image of a former supreme patriarch of Thailand (head of Buddhist monks). The third floor features Guan Yin, the goddess of mercy. Floors four to seven feature Chinese deities while a reclining Buddha occupies the top floor.

If you arrive at the riverside pier you will pass through a tall entrance arch. The Chinese text on the arch translates as “peace & serenity in the eastern sun”. 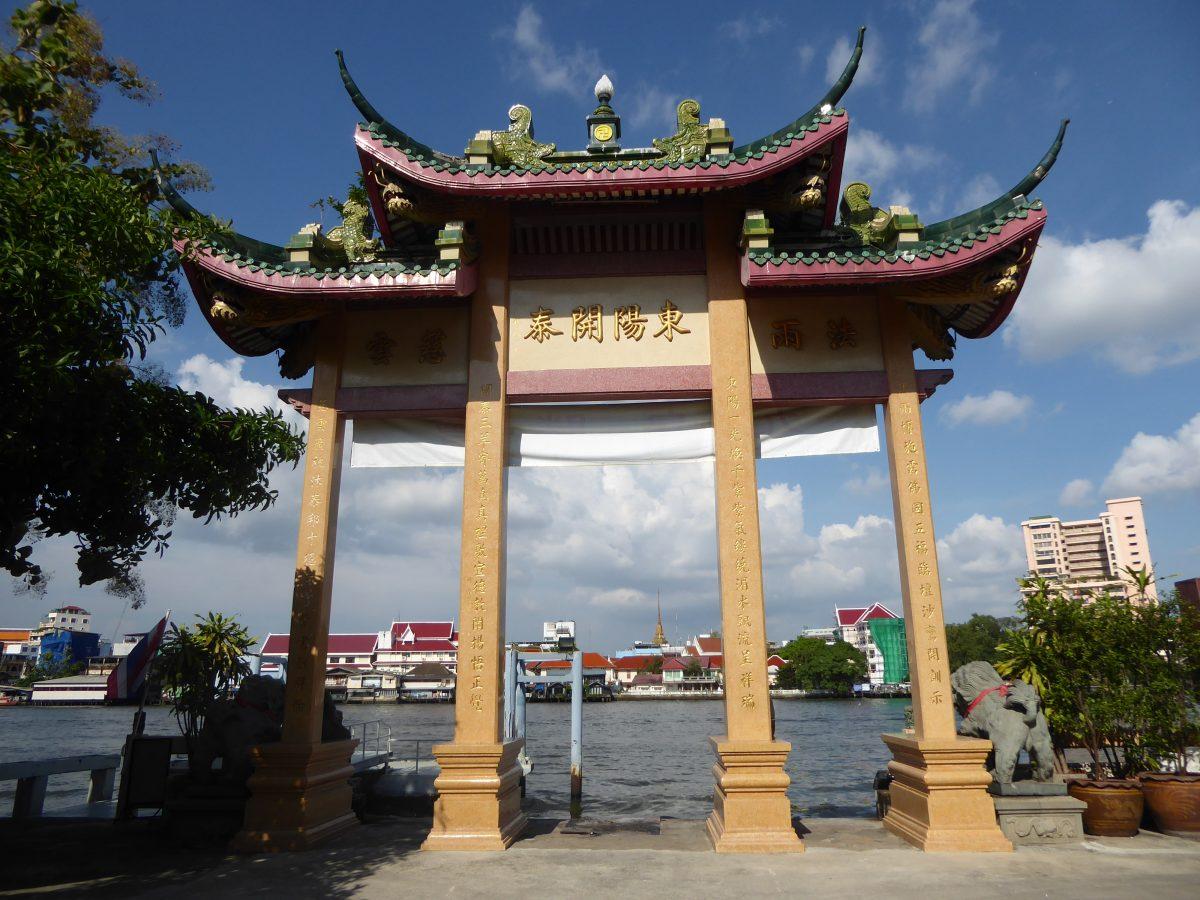 After passing through the arch there is a small sala to your right. Just outside is a small shrine with a figure of a man with a woman’s hairstyle wearing lipstick & makeup. No, it’s not a shrine to ladyboys but to a female ghost that seeks to seduce & possess men while they are dreaming. Daily offerings of incense, drinks, fruit & cakes appease her. 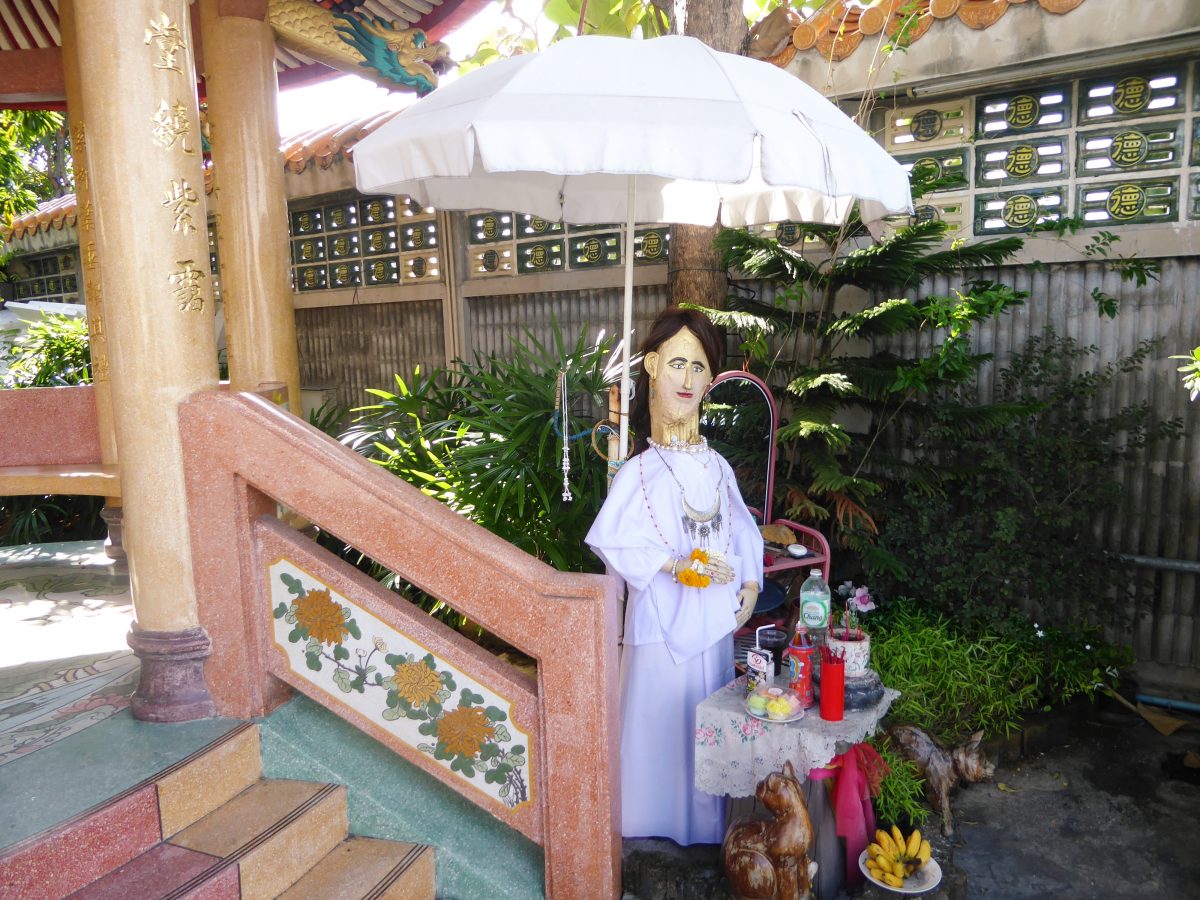 In the middle of the courtyard directly in front of the main temple building is a covered altar. The underside of the roof is colorfully decorated with dragon & flower motifs. Adorning the roof are colorful bird-shaped small dragons. 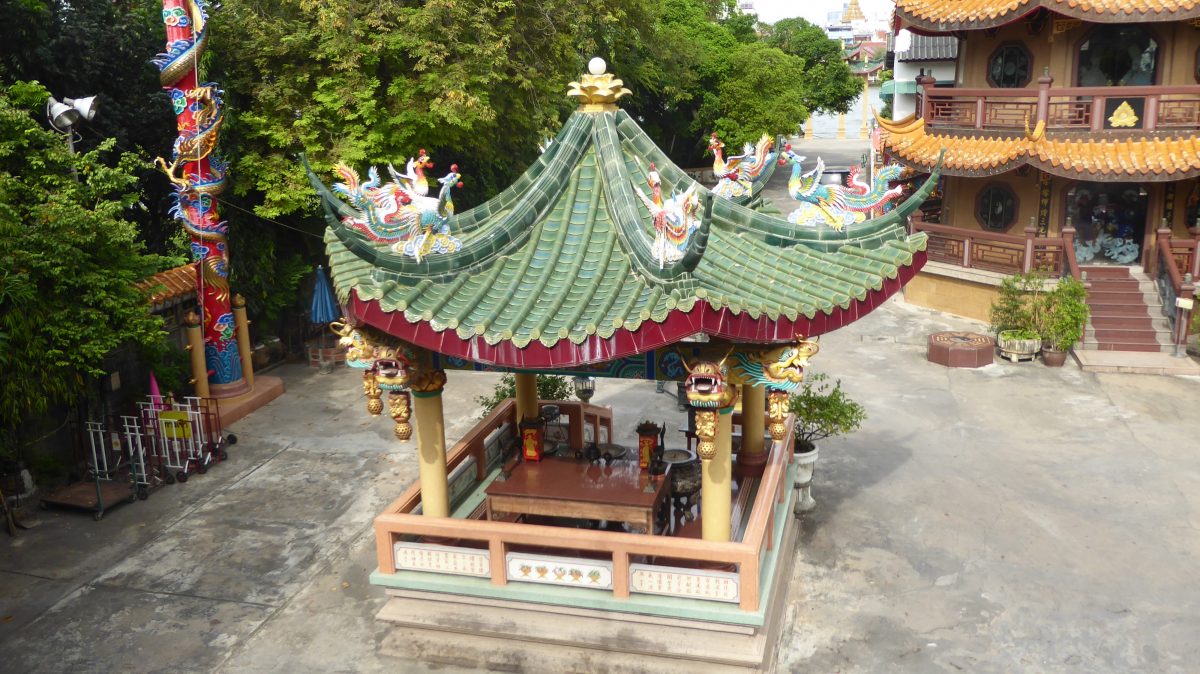 Just behind the pagoda is a multi-colored dragon sculpture wall. The purpose of the dragon wall is to stop malevolent ghosts and evil spirits from entering the temple. These can be seen in several Chinese temples in Bangkok but the wall here is bigger than most. 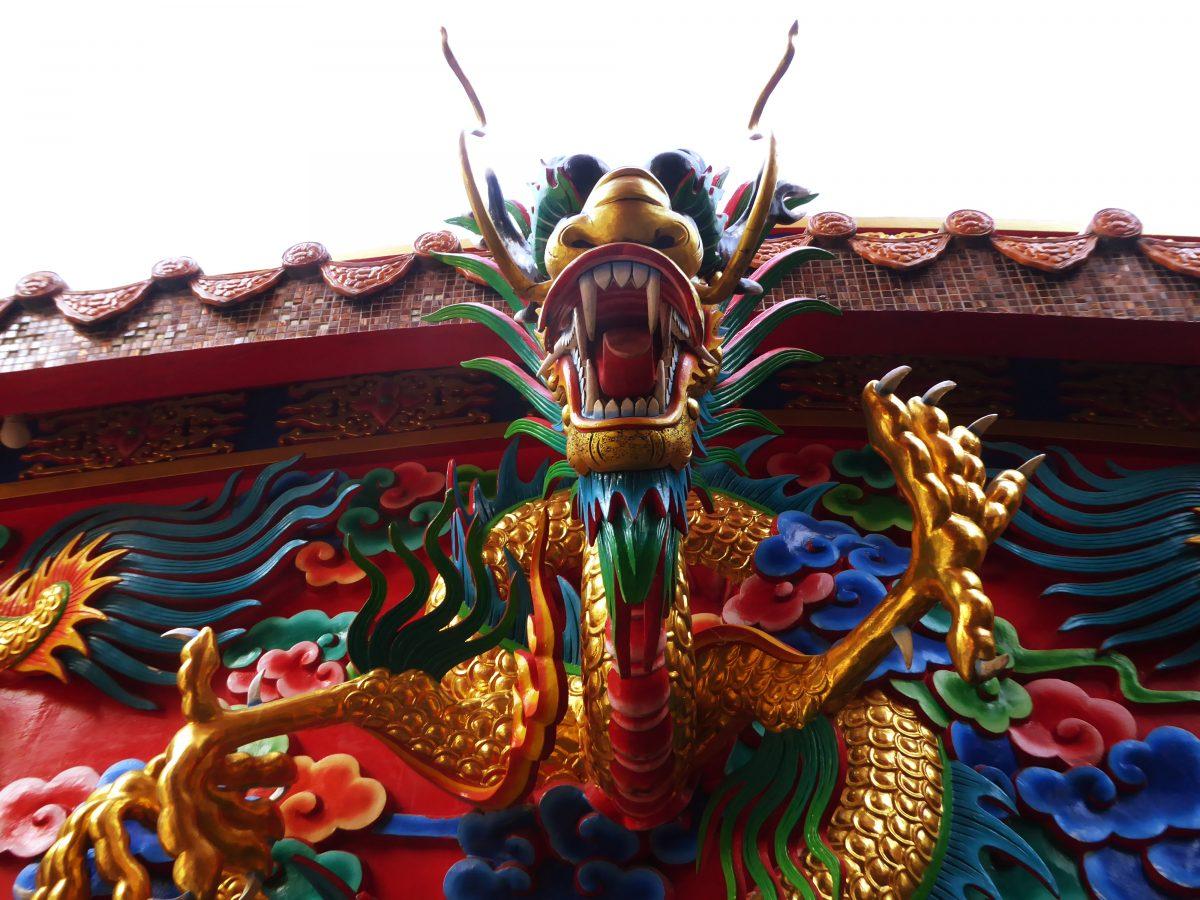 Another interesting object to catch the eye is a Chinese temple style cremation oven uniquely shaped as a large urn. This is usually used in funeral rituals. Small objects, paper & “afterlife” money is burnt to help the deceased in the next life. 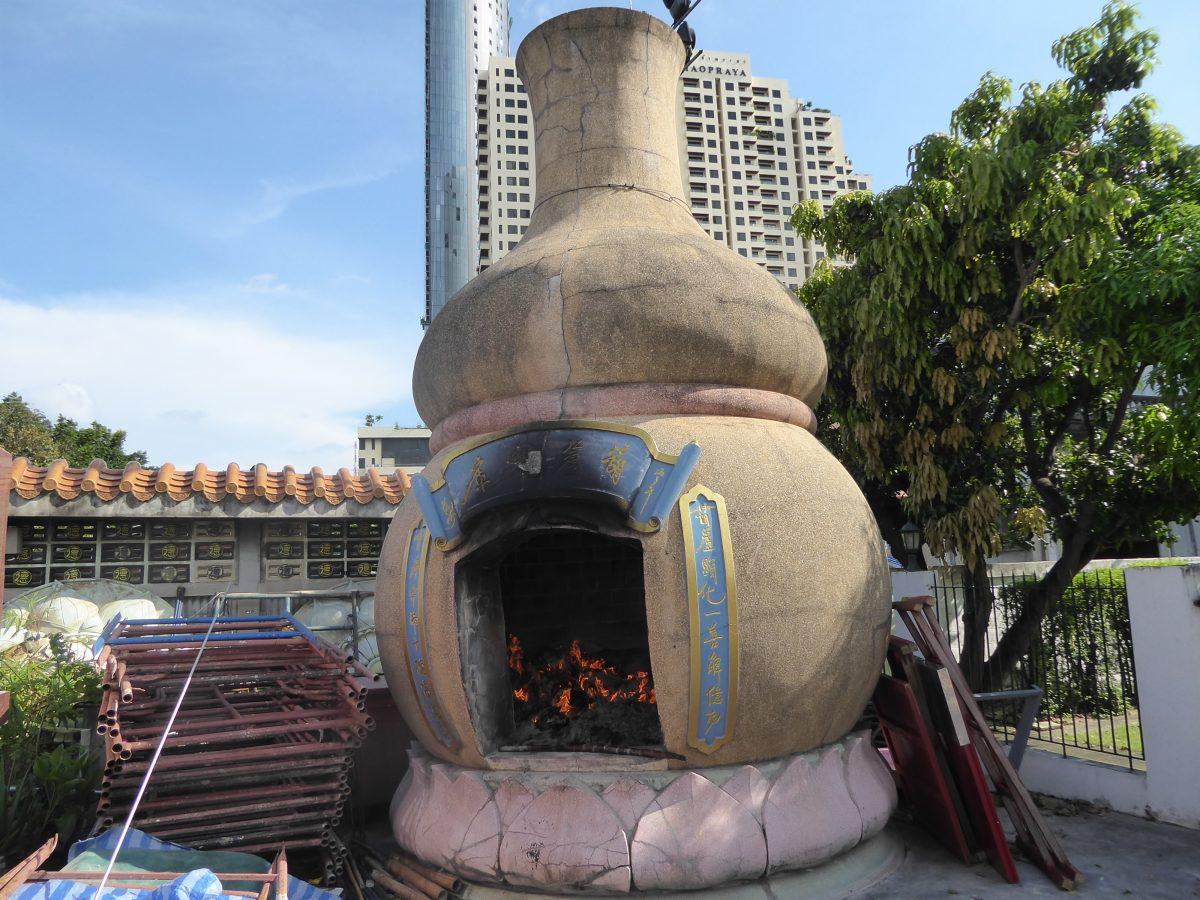 Near the arch is a small shrine with a Chinese sage image inside. People come to this shrine to pray and receive blessings for good morality. 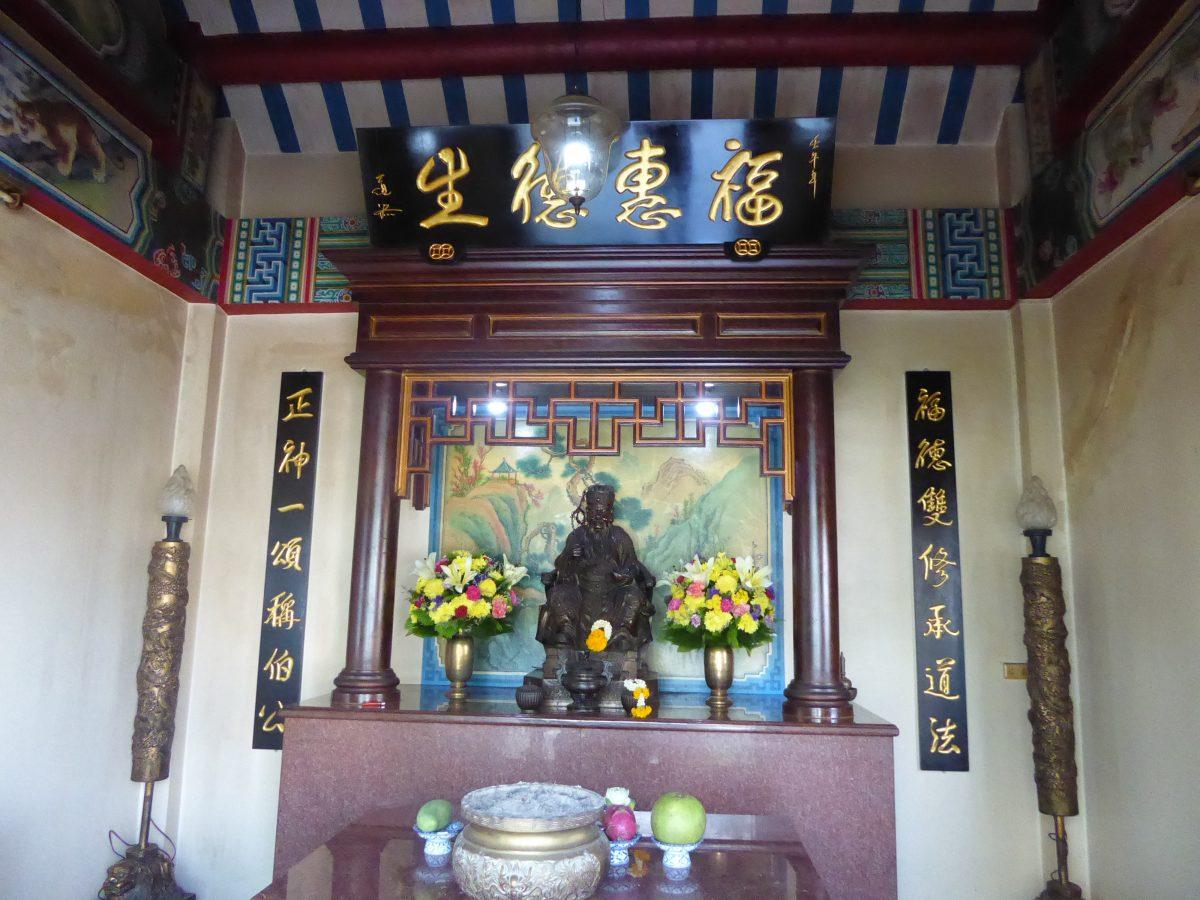 The temple isn’t on the tourist trail and has few tourists. However, it’s worth a visit if looking for something less touristy & you like temples. Getting there is actually quite easy if you take the Chao Phraya Tourist Boat to Lhong 1919. Lhong 1919 is also worth a visit as is the Jam Factory for some good coffee while Khlongsan Market has cheap shopping and street food. The temple is also walking distance from the Millenium Hilton Hotel and Icon Siam. 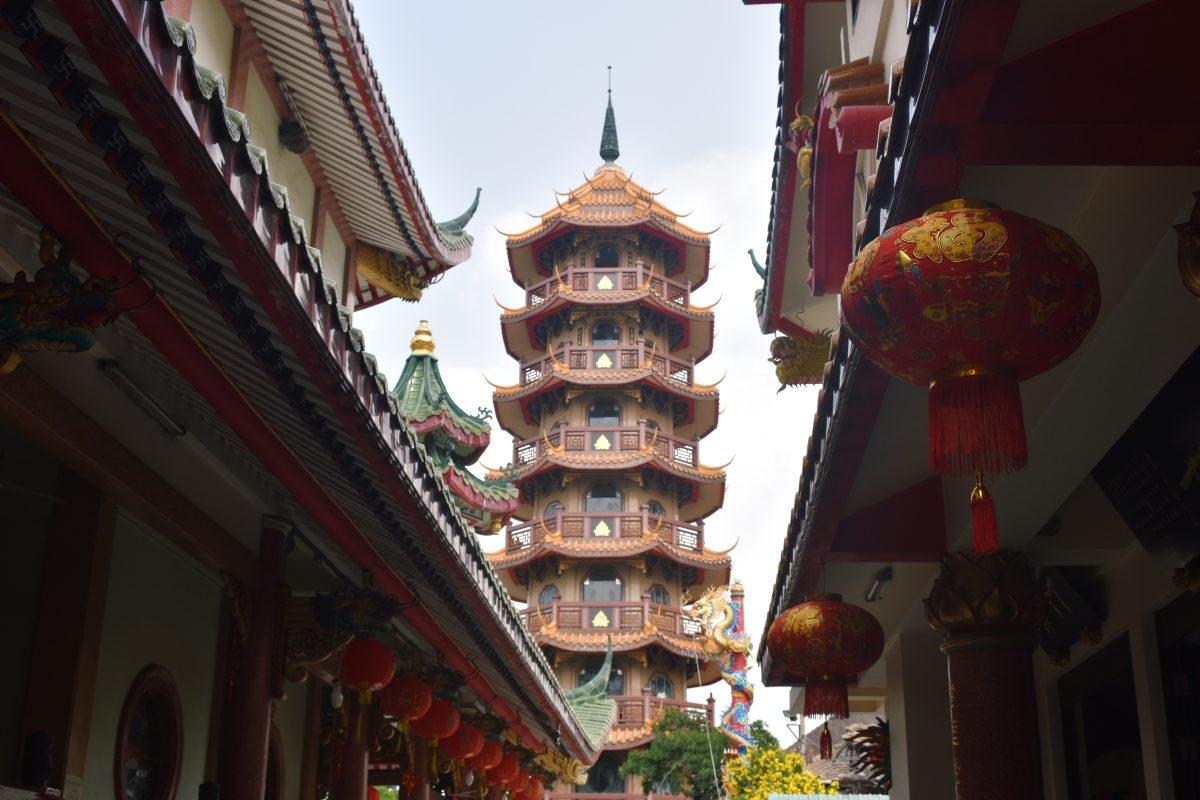 Where is Che Chin Khor Temple?

Take the cross-river ferry from Si Phraya Pier at River City to Khlong San Pier (5 baht). Walk through Khlongsan Plaza & turn right on to Charoen Nakhon Road. At the intersection turn on to Somdet Chao Phraya Road. Continue past Taksin Hospital and turn right into Somdet Chao Phraya Soi 17 just before a 7-11. You will see a Brown Plaque for Che Chin Khor here. You will pass several street food stalls on your left. Turn left & Wat Thong Nopakun will be straight ahead. Just past the temple turn right and then left again for Che Chin Khor.

Alternatively, take the Chao Phraya Tourist Boat to Lhong 1919. Walk up Chiang Mai Road & turn left on to Somdet Chao Phraya Road. Turn left again on to Soi 17 & follow the directions as above.

You can also take the cross-river ferry from Sawasdee Pier in Chinatown (next to Chinatown Riverview Hotel off Songwat Road) to Wat Thong Pier (5 baht), next to Lhong 1919. Then follow the route from Lhong 1919 as above.

A Shrine to the Goddess of the sea

The largest & most important Chinese temple in Bangkok

A Walking Guide to Bangkok’s Chinatown