A Riverside Shrine to Guan Yu, a Chinese deity

The Guan Yu Shrine in Bangkok is dedicated to Guan Yu, courtesy name Yunchang. He was a general serving under the warlord Liu Bei during the late Eastern Han dynasty of China. You will also see his name spelled as Kuan U or Kuan Yu. He is historically renowned as being loyal & righteous. Many Chinese people around the world worship Guan Yu including Confucianist, Taoists & Chinese Buddhists. His character has appeared in many famous Chinese movies such as Red Cliff & Three Kingdoms. 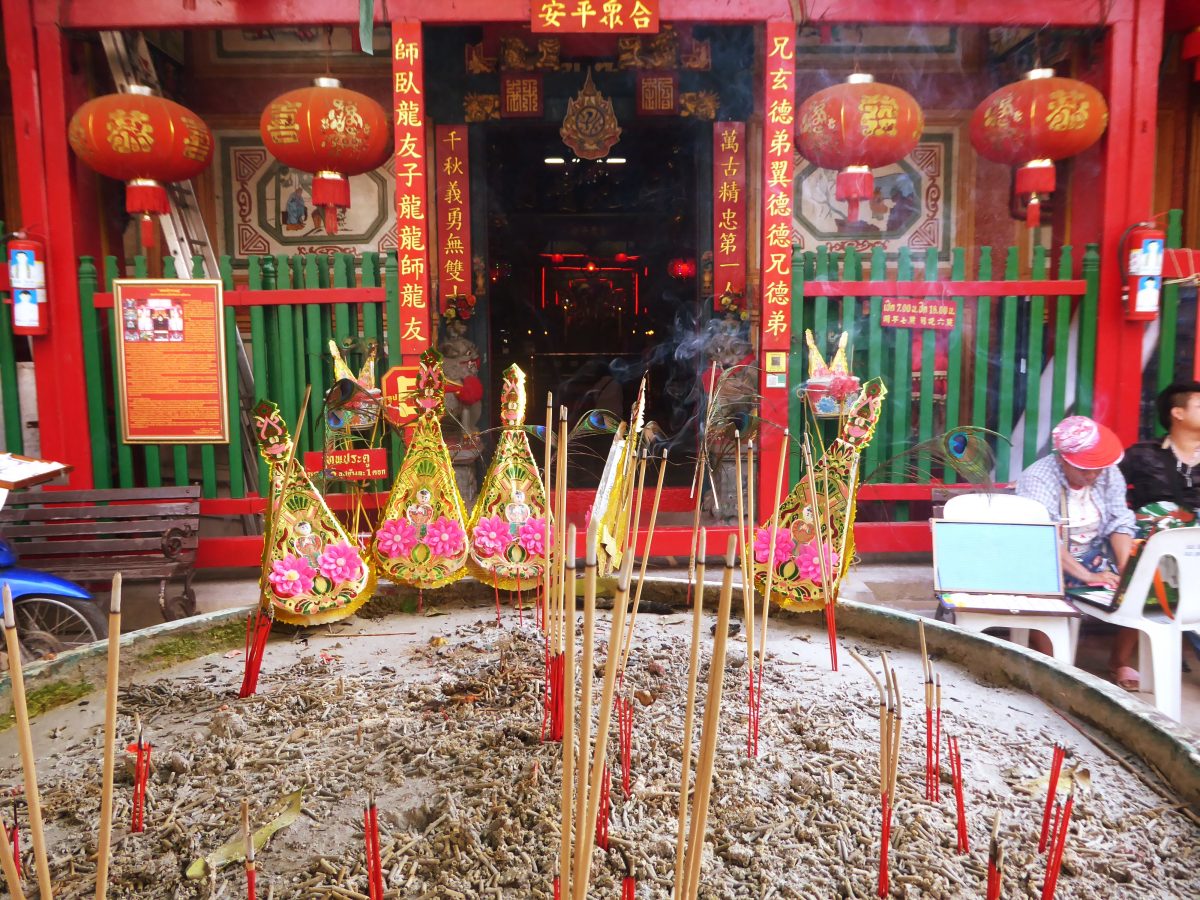 The Guan Yu shrine in Bangkok will be recognizable to anyone who has traveled on the Chao Phraya River in Bangkok. It is on the Thonburi riverbank just before you reach Memorial Bridge after you have passed Chinatown. The shrine dates back to the 18th century, established by Hokkien immigrants from China. The shrine consists of two parts, a riverside tower, and an indoor shrine hall. It’s the oldest Guan Yu shrine in Thailand. 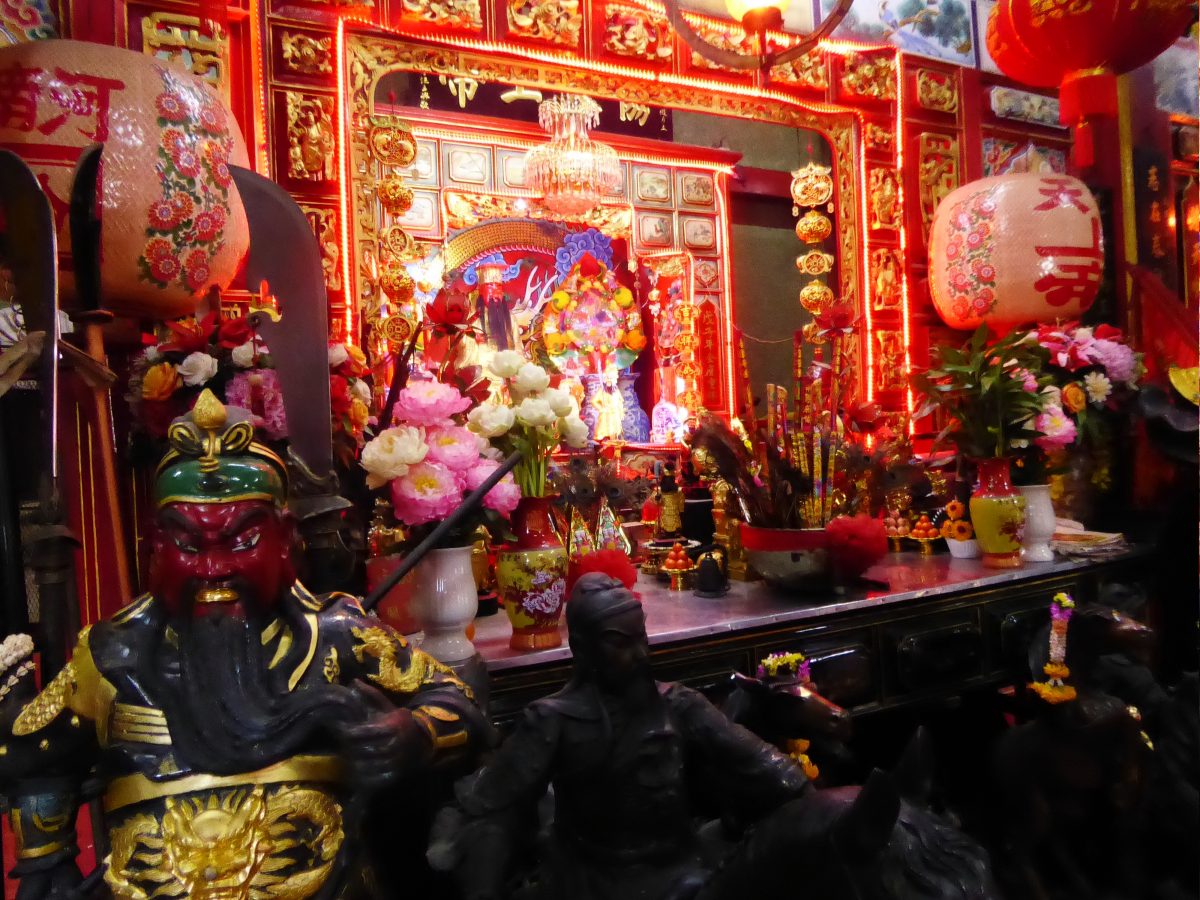 The main shrine hall features three images of the red-faced Guan Yu with his distinctive long black beard. They were all shipped from China between 1736 & 1822 with the largest image now seated in the middle.  Also, inside are images of Kuan Yin, (the goddess of mercy), Bodai, (the laughing Buddha) & Amitabha (the future Buddha). The hall glows with red light & the air is thick with incense smoke. Behind the main image, the wall decoration features some beautiful painted ceramic wall tiles. 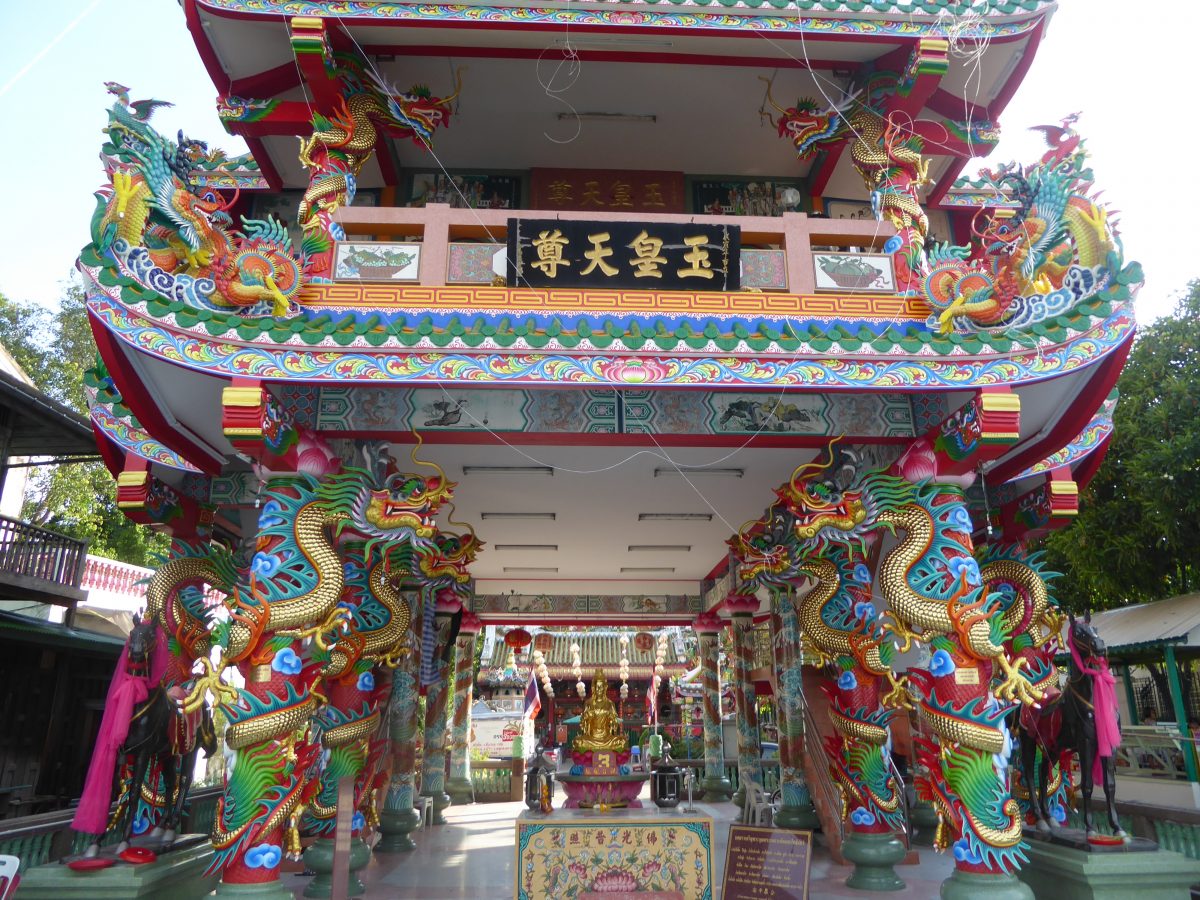 Outside in the courtyard are a couple of small altar shrines, & an oven for burning paper offerings. Red lanterns are strung across the courtyard leading to the riverside pagoda. Strings of red lanterns stretch across a courtyard to the beautifully detailed pagoda. In the center is an image of Guan Yin. The pillars are beautifully decorated with colorful dragons coiling around the pillars. Either side of the central platform is two black horses decorated with garlands and pink scarves. Horses are revered in Chinese culture where they are viewed as a symbol of strength, vitality, speed & beauty. The horse is closely related to the dragon in Chinese mythology and they often appear side by side in Chinese places of worship. 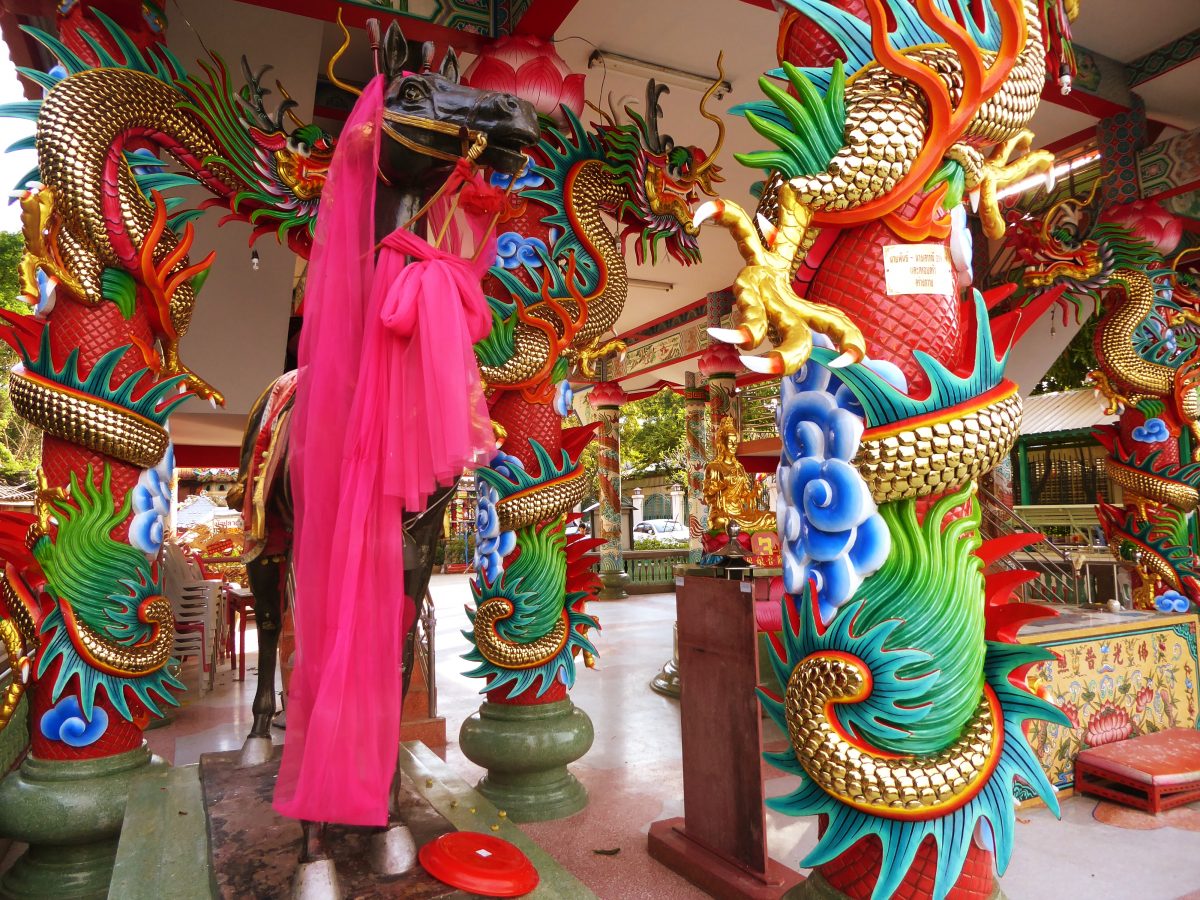 From the three-story pagoda, you will get a great view of the ever-busy Chao Phraya River with its flowing stream of passing boats & people. 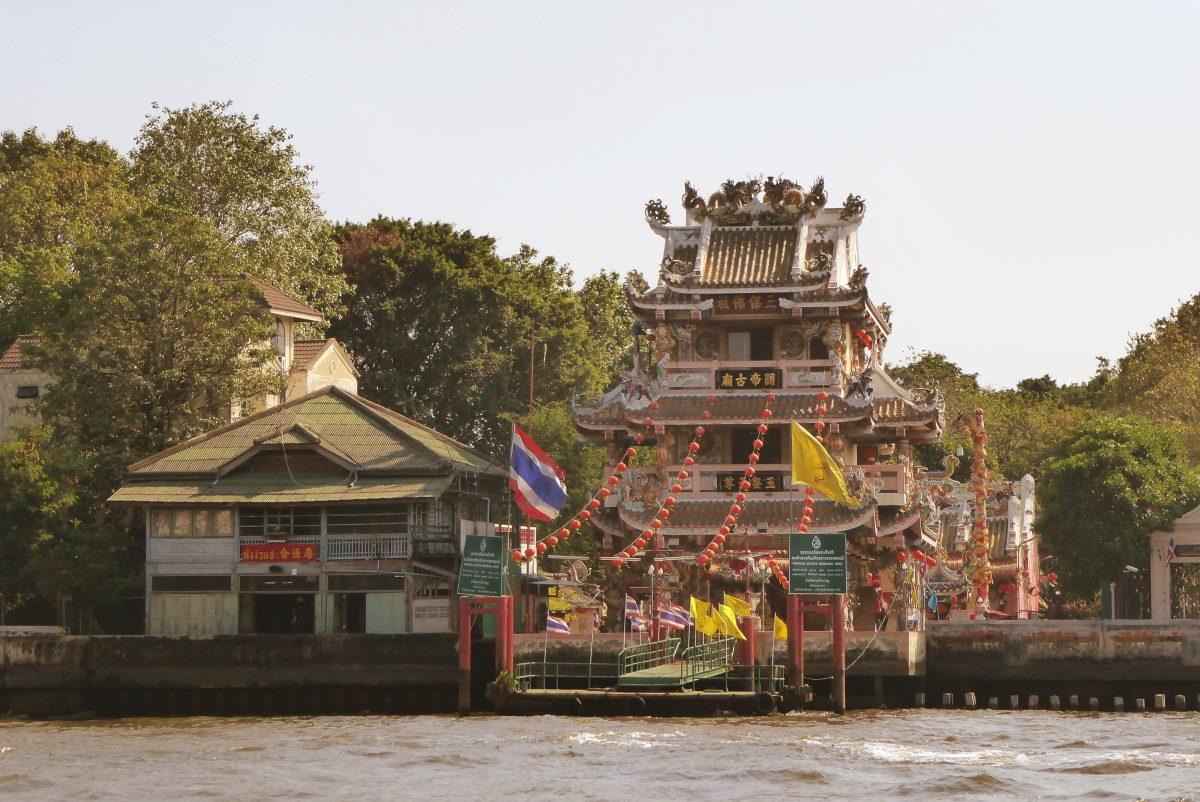 The Shrine from the river

The shrine has a loyal following among the local community and is popular with people who are trying to sell land or houses. They believe that praying & making offerings to Guan Yu will bring a successful sale. Hopeful land sellers bring their title deeds to the shrine which they strap to their waist.

Despite its prominence, on the riverside, the shrine is little visited by tourists. There is no regular boat service to the shrines pier but you can walk across Memorial Bridge from the express boat pier. Other nearby places of interest that are within walking distance are Wat Prayoon, Wat Kanlayanamit, Santa Cruz Church, Kian Un Keng Shrine, & Wat Pitchaya. Just behind the shrine is the Queen Mother Memorial Park, a peaceful spot with a small museum, sculptures & art.

Where is Guan Yu Shrine?

Getting There: Take the orange flag Chao Phraya Express Boat to Memorial Bridge Pier. Cross the bridge & take the stairs down to Phaya Mai Road. Turn left on to Uthai Alley, walk straight on to Dilok Chan Alley & turn left on to Somdet Chao Phraya 3 Alley. You will pass the park on your left. Follow the road around to the riverside where you will find the shrine.

A Shrine to Mazu, the Goddess of the Sea