A Buddhist Temple inside a Church

Wat Niwet Thammaprawat is a Buddhist temple in the grounds of Bang Pa-In Royal Palace. The Wat is a royal temple, first class & was founded in 1878. It is unique as it is the only Buddhist temple in Thailand that looks like a western church. The temple is officially registered as a historic monument. 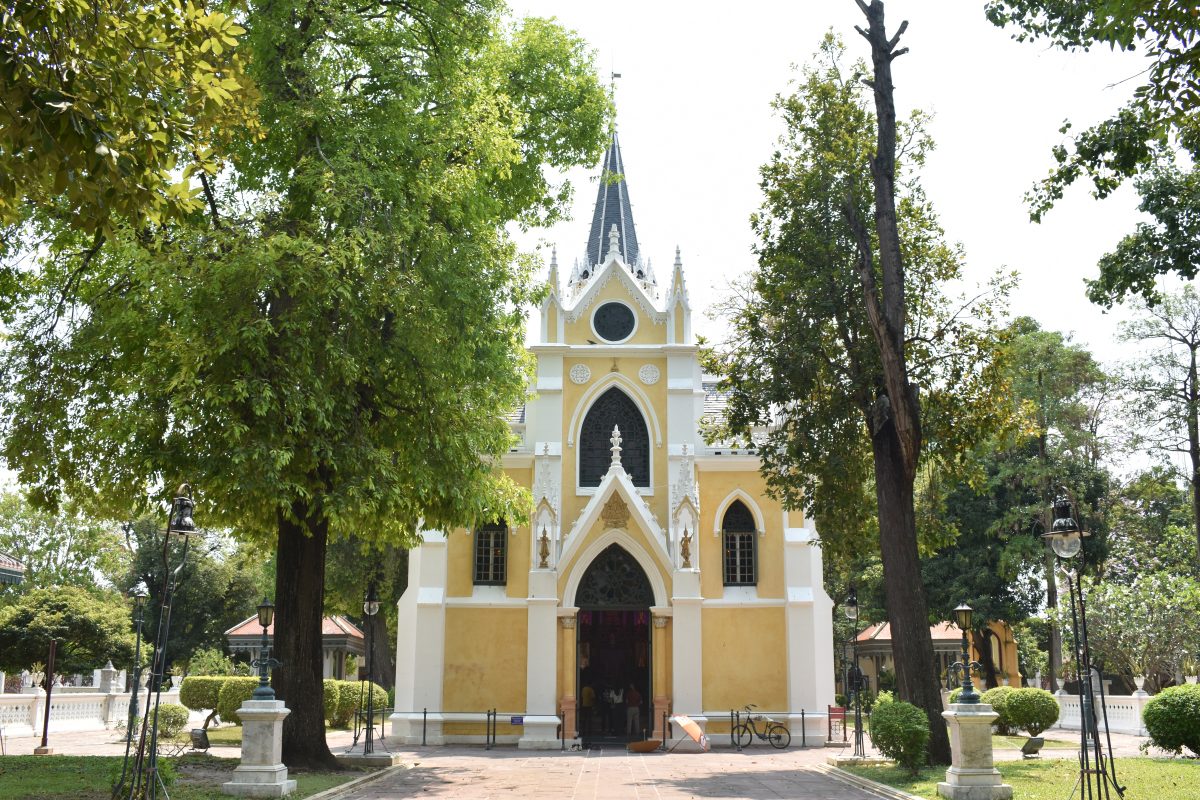 One of the most unusual temples in Thailand

Wat Niwet Thammaprawat isn’t part of the same complex as Bang Pa-In Royal Palace. The temple is on Balen Island on the Chao Phraya River directly opposite the palace. There is no direct access from the palace grounds. Access is by an old cable car controlled by a monk that crosses the river from the palace car park. The cable car is free.

King Chulalongkorn ordered the construction of Wat Niwet Thammaprawat in 1876 & it was completed in 1878. It was to serve as the Royal Palaces temple. The temple’s design was by an Italian architect, Joachim Grassi who was also the architect responsible for the expansion of the Royal Palace. Wat Niwet Thammaprawat features a Gothic Revival style with stained glass windows, a gothic altar, and the main Buddha image in a place that would usually contain the cross in a western church. 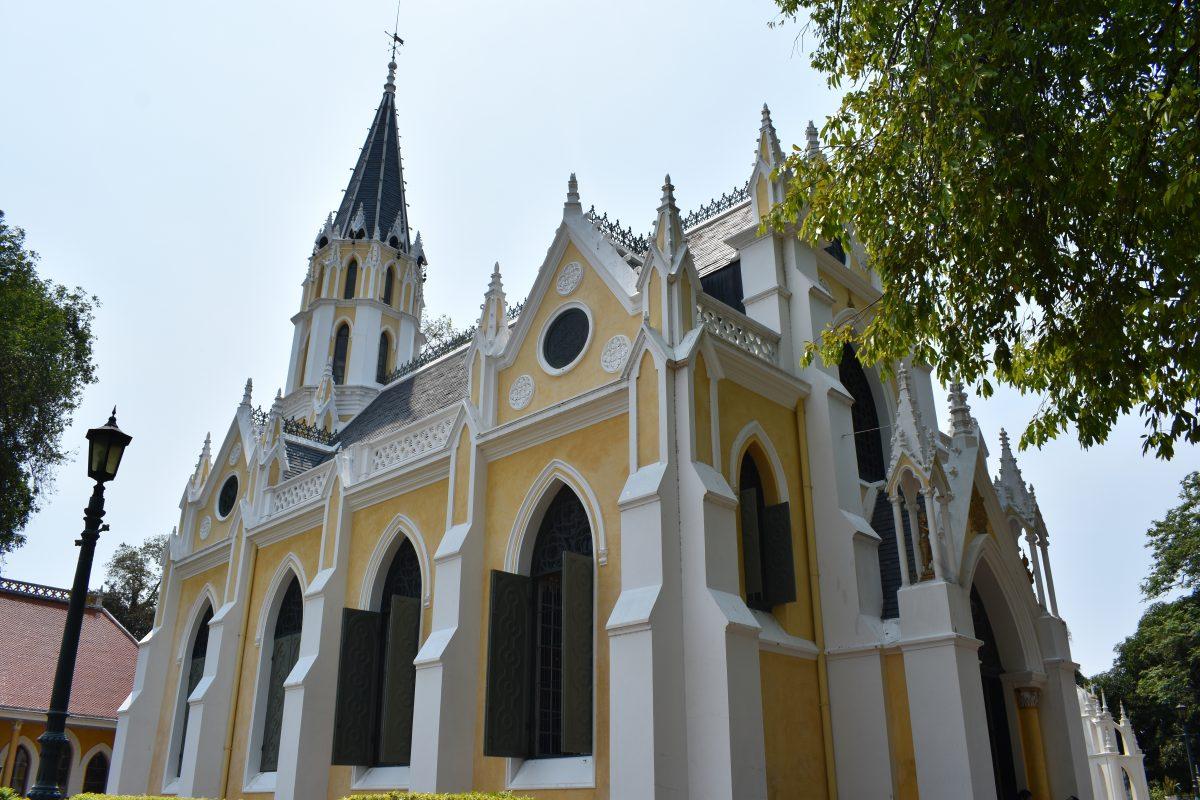 The exterior of Wat Niwet Thammaprawat was designed to look like a Basilica with a central dome topped with a spire. It has all the physical features of a Christian Church. The lower section of the dome features a clock tower & belfry with relics of the Buddha in the upper section. The facade decor is a stucco relief of the great seal emblem & stained glass ornaments. Also, a shrine opposite features two sculptured statues of King Chulalongkorn in the coronation setting.

The interior of Wat Niwet Thammaprawat resembles a Christian cathedral with steeply sloped gothic roofs. A stained glass window inside & above the entrance door features the image of King Chulalongkorn. The principal Buddha image is Phra Buddha Phuttha Naruemon Thammopat, seated on a plaster base. The Buddha, flanked by two disciple saints, while underneath the images are two small golden chedis. There are also a couple of small statues of European style medieval knights in armor. The walls of the hall have stained glass windows & more small Buddha images. A stone plaque relates the story of the temple.

To the right of the ordination hall is a shrine where the Buddha image, Phra Khanthararat in the posture of requesting rain is kept. Opposite there is another shrine that houses a seated stone Buddha image on a coiled Naga. It is an ancient Buddha image, more than a thousand years old, built during the Lopburi period by a Khmer Craftsman.

Outside the main gate of the temple are large grounds featuring more Buddha images and a large building. 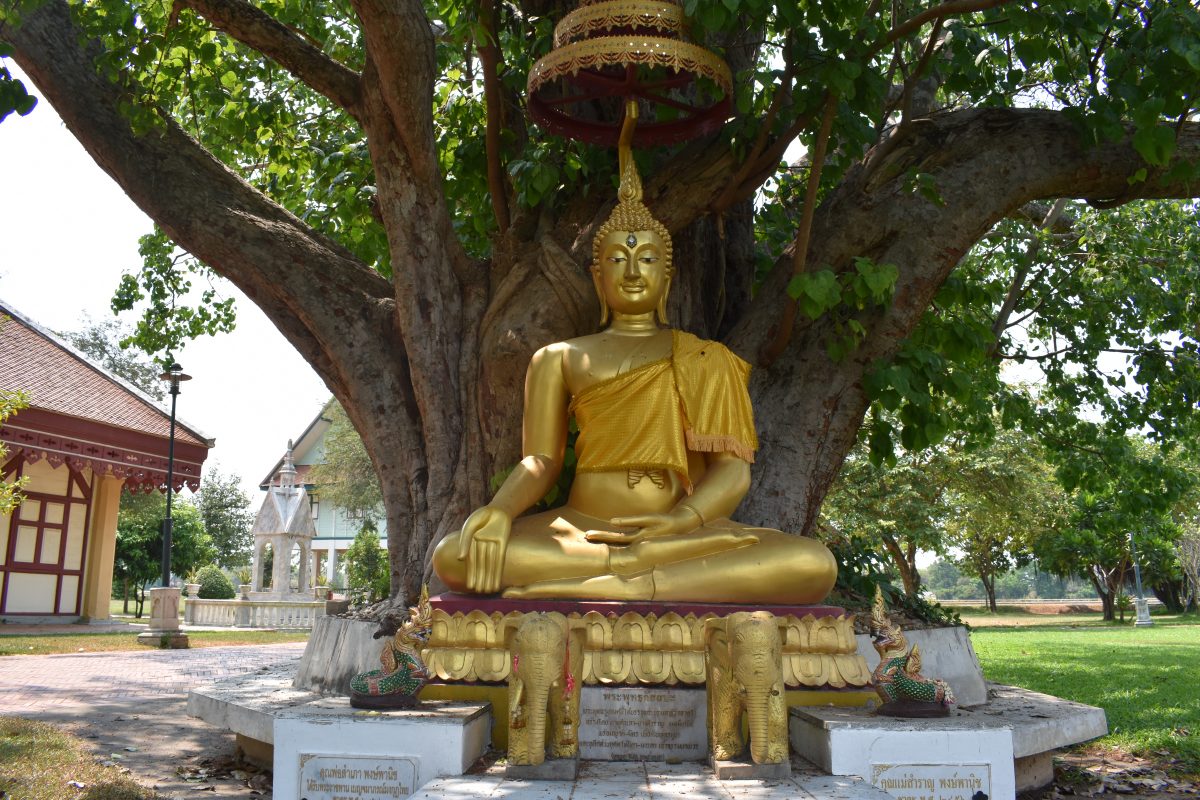 Another Buddha under a Bodhi Tree

Behind the ordination hall is the old sermon hall which now houses a King Chulalongkorn Museum. Behind that is a mansion which was once the residence of Prince Damrong Rajanubhab after he was ordained as a monk. Damrong was a son of King Rama IV and was the founder of the modern Thai education system. The top floor of the mansion is open for visitors. There is also a Buddhist scriptures hall containing many rare Buddhist artifacts. 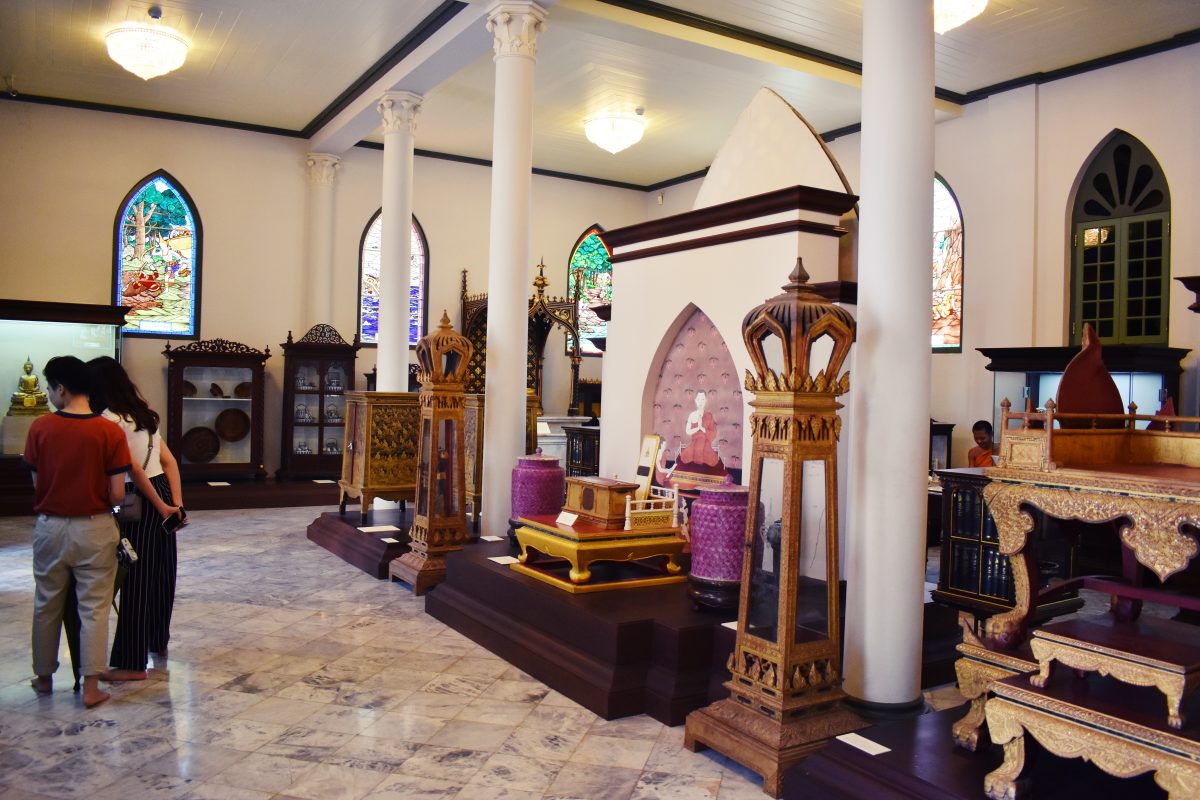 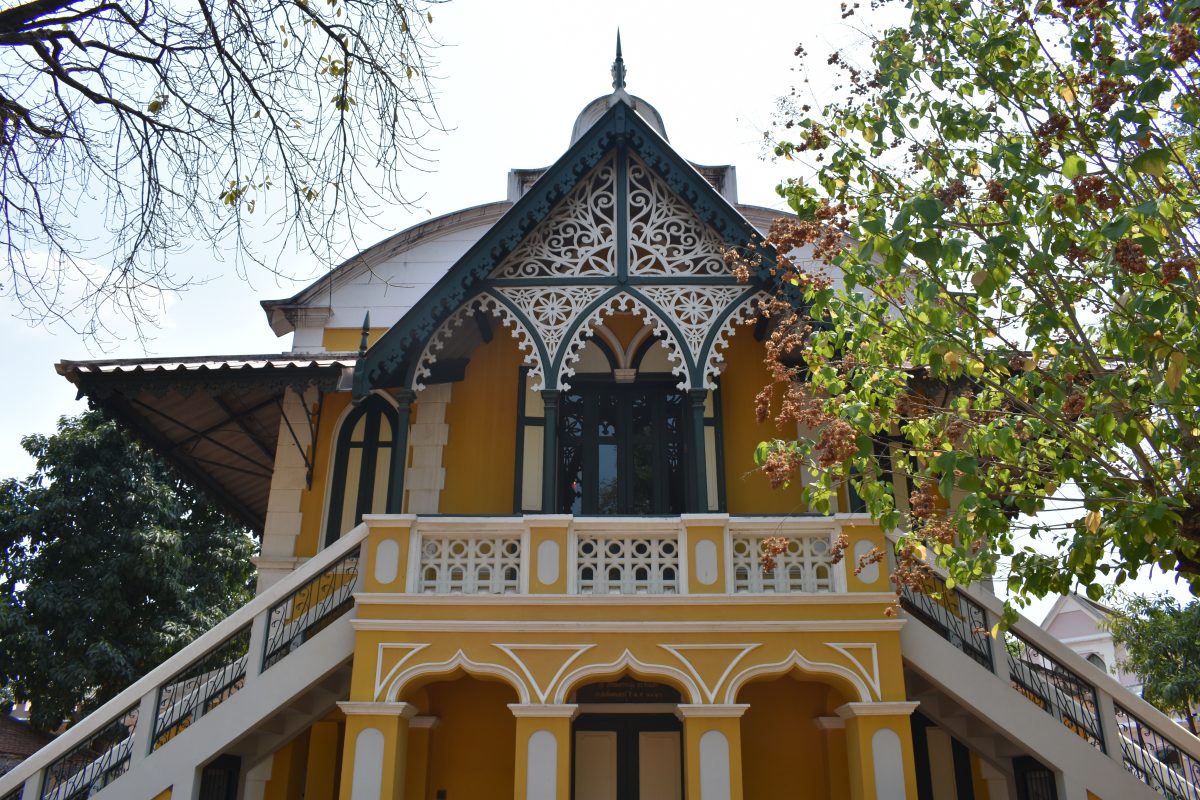 At the tip of the island near the cable car is the Balen Island Lighthouse. King Chulalongkorn constructed the lighthouse in 1867. The Royal Palace received its supplies by boat and the lighthouse aided safe navigation. The lighthouse is no longer in operation. 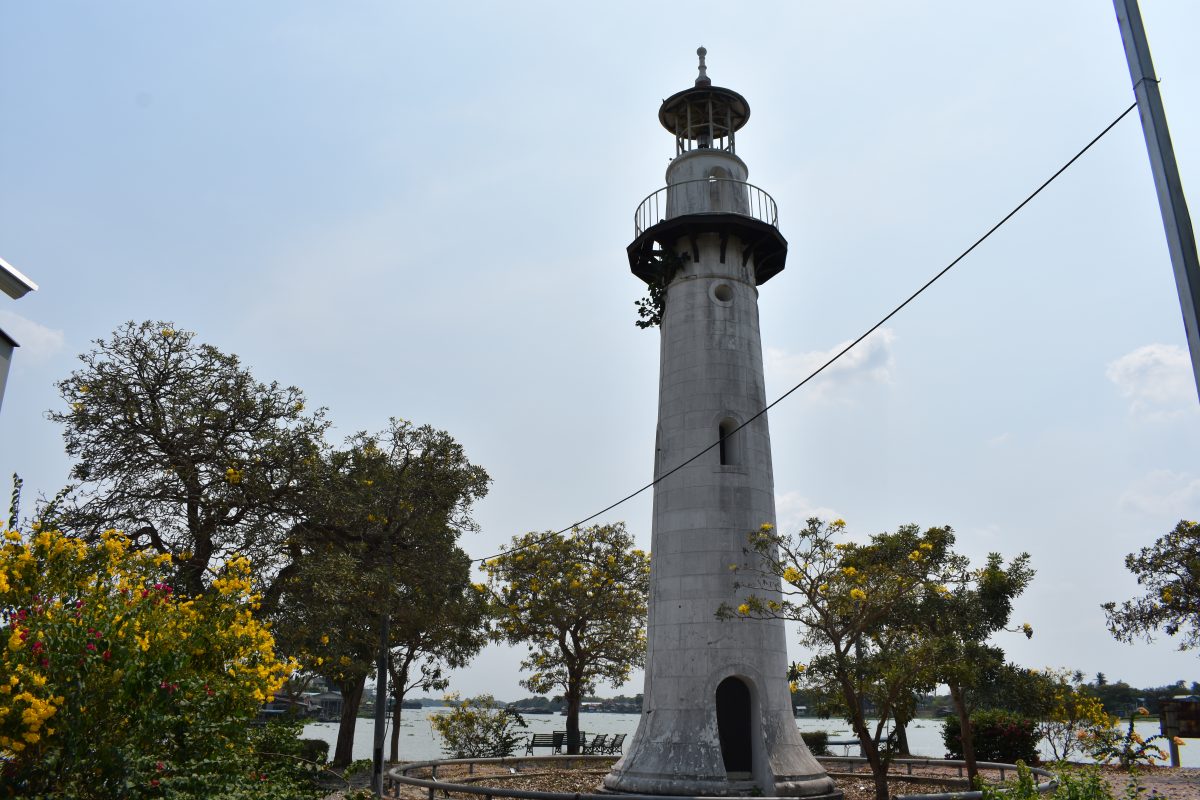 In Bang Pa-In opposite the Royal Palace.

You can get to Wat Niwet Thammaprawat by train, bus, van, boat or take a guided tour from Bangkok.

From Bangkok Northern Bus Terminal, on Kamphaeng Phet 2 Road, take a bus to Bang Pa-in. They run daily every 30 minutes.

There are trains running from Hua Lamphong Railway Station in Bangkok to Bang Pa-in Railway Station daily every hour starting from 06.40-22.00 hrs. You can then take a Tuk-Tuk (50 baht) or Motorcycle Taxi (40 baht) from outside the station to the palace. Walking from the station to the palace will take you 20 minutes. You can also take the train from Ayutthaya (20 baht).

There is no public boat going to Ayutthaya. However, there are several companies that organize excursions from Bangkok to Ayutthaya and Bang Pa-In. See below.