Wat Poe Man Khunaram is one of the most important Mahayana Buddhist Temples in Bangkok. Established in 1959, this sacred elegant temple is home to elaborate architecture that fuses Thai, Chinese and Tibetan schools of design. Wat Pho Man Khunaram is also the center of the Chinese Order of Buddhist Monks, an important place in Buddhist education and priesthood. 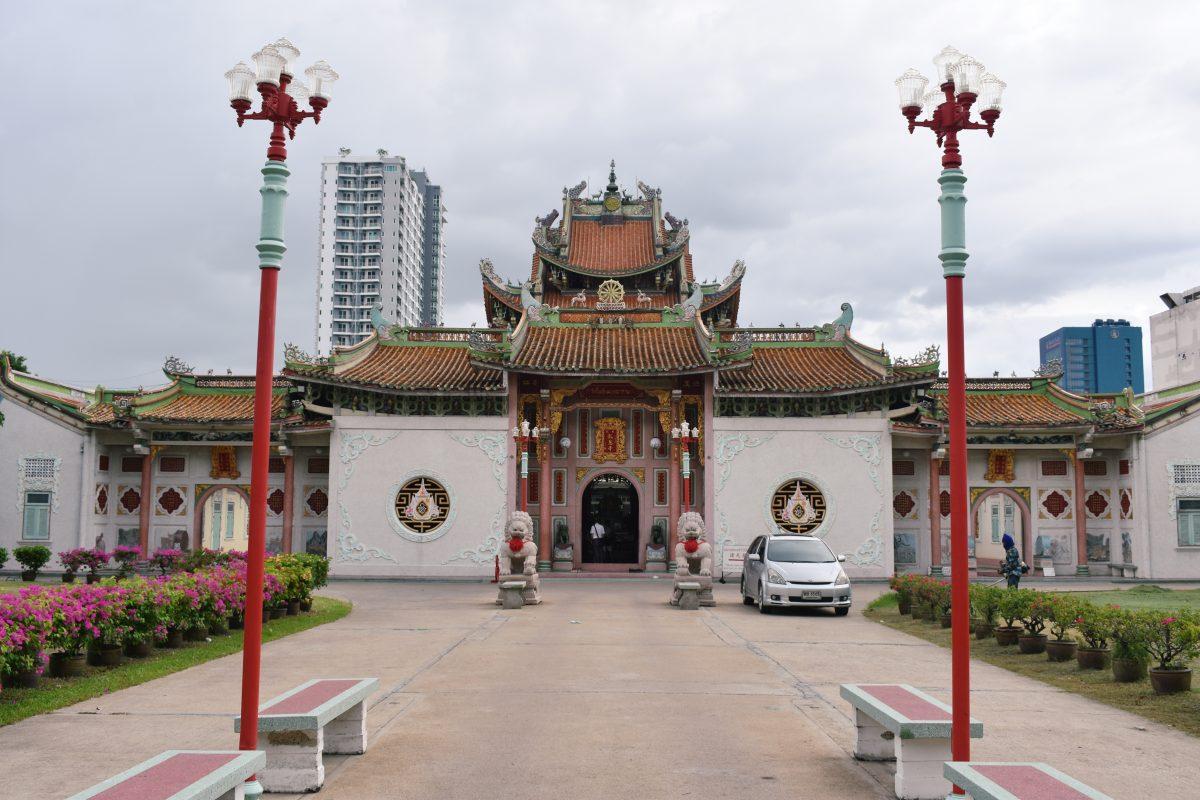 Wat Poe Man Khunaram was designed by a Chinese spiritual master and constructed in accordance with Feng Shui, with the temple acting as the vehicle and the Buddha as the leader. Feng Shui is a Chinese pseudoscience that uses energy forces to harmonize individuals with their surrounding environment. It is also believed to protect the temple from malign influences.

The entrance to Wat Poe Man Khunaram is through a large Chinese style archway. The roof of the arch is adorned with some small animal statues including what looks like a pigeon being ridden by a gnome-like figure. Beyond the archway is a plaza with a driveway leading to the outer wall of the temple complex. In the garden area on the left-hand side, is a mini-pagoda, adorned with small Buddha images residing in nooks all the way to the top. Next to this is a monument featuring a tiered umbrella. In 1970, HM King Bhumibol came to perform the raising of a tiered umbrella which was placed on the top of the main building of the temple. He also granted the placement of his royal initials above the entrance to the temple.

On the right-hand is a gazebo featuring a trio of Hindu deities. The four-faced Lord Brahma, the elephant-headed Ganesh & “the destroyer” the four-armed Shiva with her trident. Nearby is an altar before a statue of a pink face Chinese or Tibetan deity.

The outer temple walls are designed in a classic Chinese/Tibetan style with a central arched doorway flanked by another on both the left and right sides. The lower half of the walls have beautiful murals depicting a variety of animals. The upper walls are decorated with Chinese script. Another classic Chinese feature is the circular windows fitted with metal geometric grills. In front of the entrance are two guardian stone lions (Shishi). The lions are thought to have magical powers to repel evil spirits. If you look up to the roof of the temple you will see the tiered umbrella at the very top of the roof.

Entering through the central entrance brings you into the Vihara of Wat Poe Man Khunaram. The hall is cave-like and the lighting subdued. The ceiling has some beautiful murals and is filled with hanging red lanterns. In each corner of the hall is a Chatulokkaban, the four heavenly kings who represent the four guardians of the world. They each look after one of the four cardinal directions, north, east, south & west.  Clothed in warrior costumes, they each carry a symbolic object. They are responsible for warding off evil spirits.

In the center of the hall is a large laughing Buddha in a glass case. Before him are four small Chinese gods. People pay their respects to the Laughing Buddha and pray for wealth and contentment. Incense sticks are lit and placed at the altar along with candles in glasses on which worshippers write their name on paper and attach to the glass. 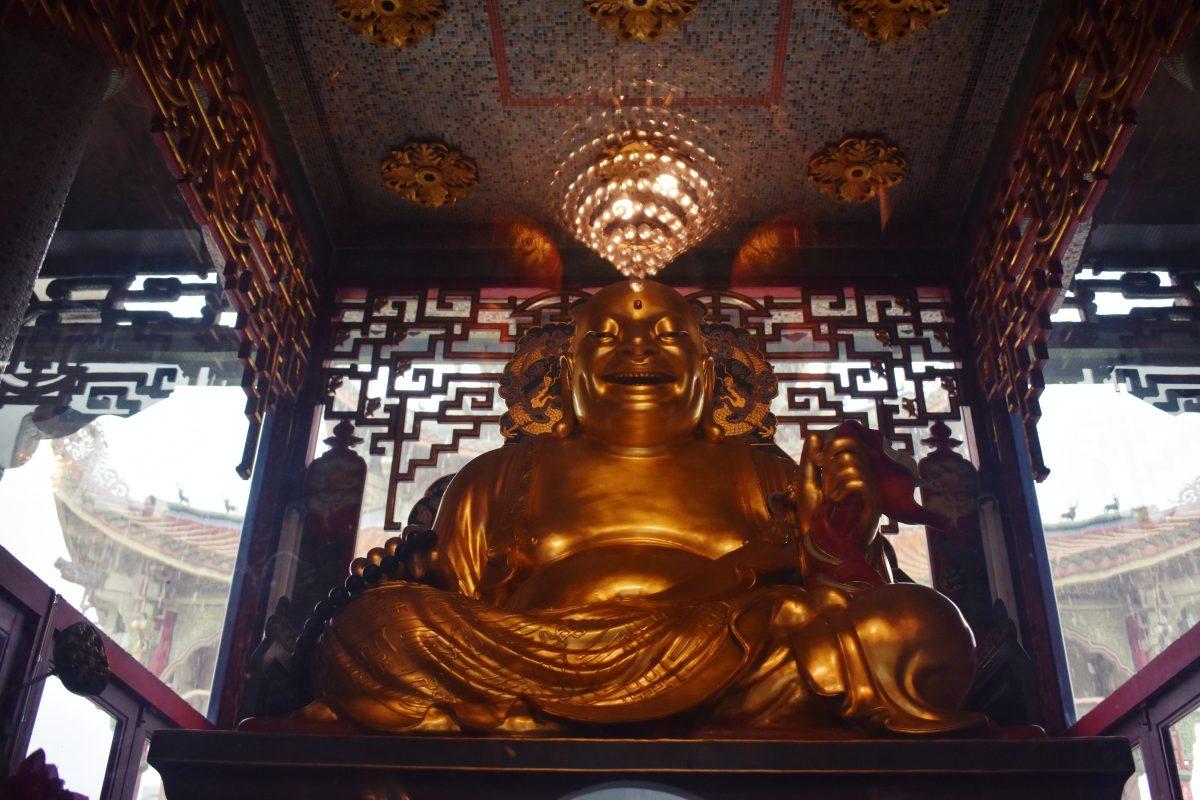 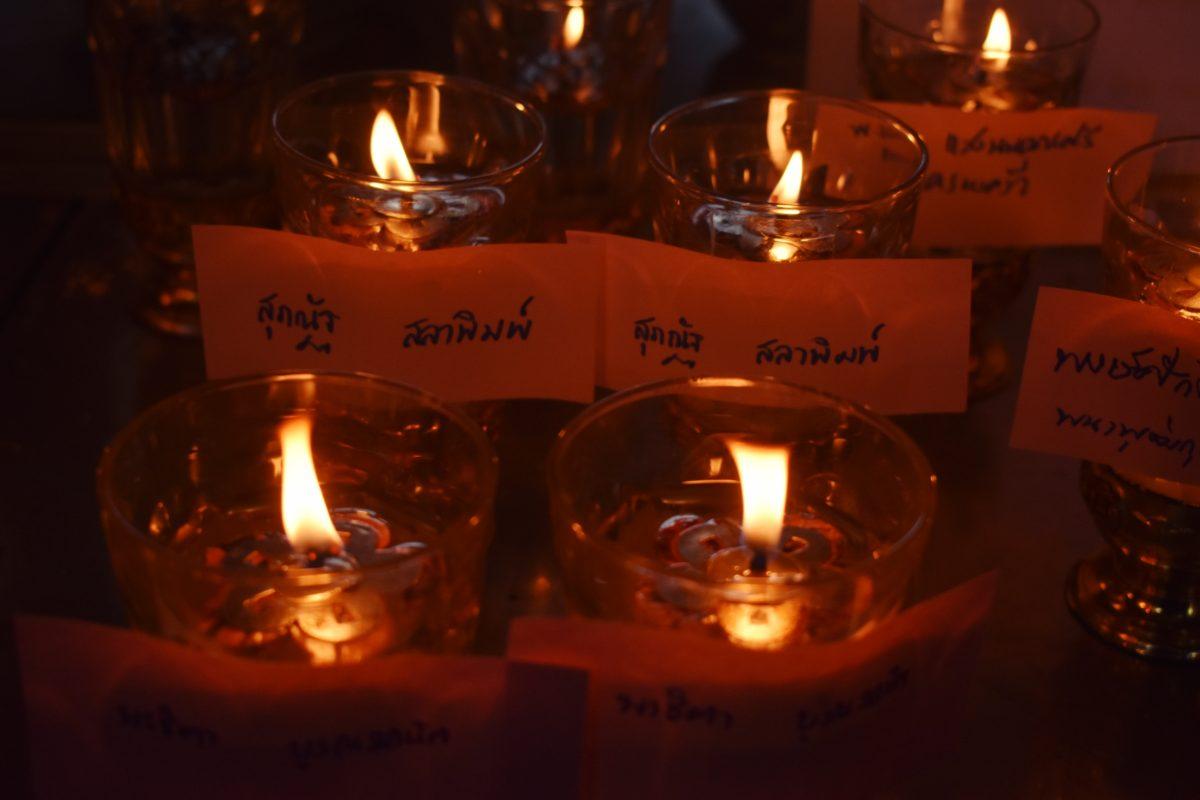 Behind the laughing Buddha is an image of Phra Sriariyamaitraya Bodhisattva (the future Buddha) dressed in Jewels and wearing a headdress, enclosed in a glass case. 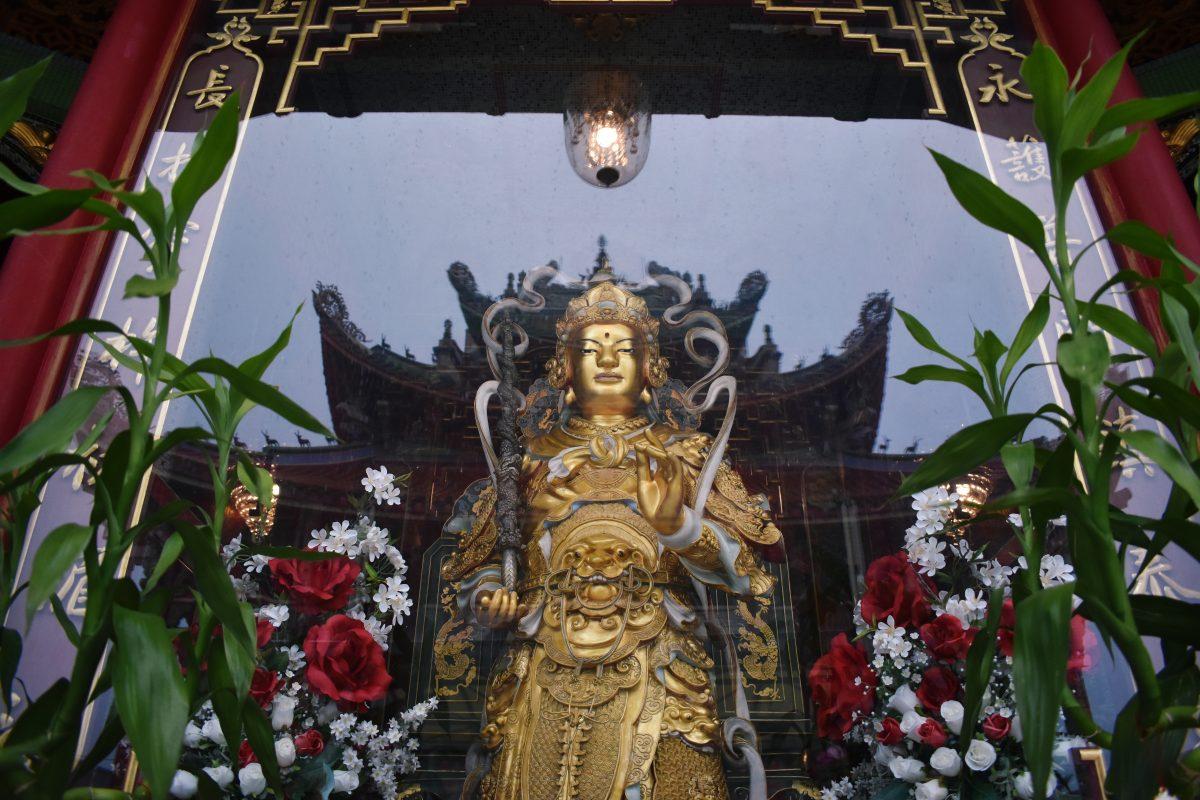 Directly across from the Viharn is the Grand Hall (Ubosot) standing in the middle of the courtyard. Inside is the principal Buddha image “Phra Buddha Vachara Bodhikhun” covered in gold leaf. The image was named by King Rama IX in 1971. His Majesty’s initials are above the halls main entrance.

In front are several other Buddha images including both black & white Buddhas. The walls of the hall have some beautiful murals of monks and the hall is brightly decorated with flowers. A monk is in attendance to take prayers and give blessings. 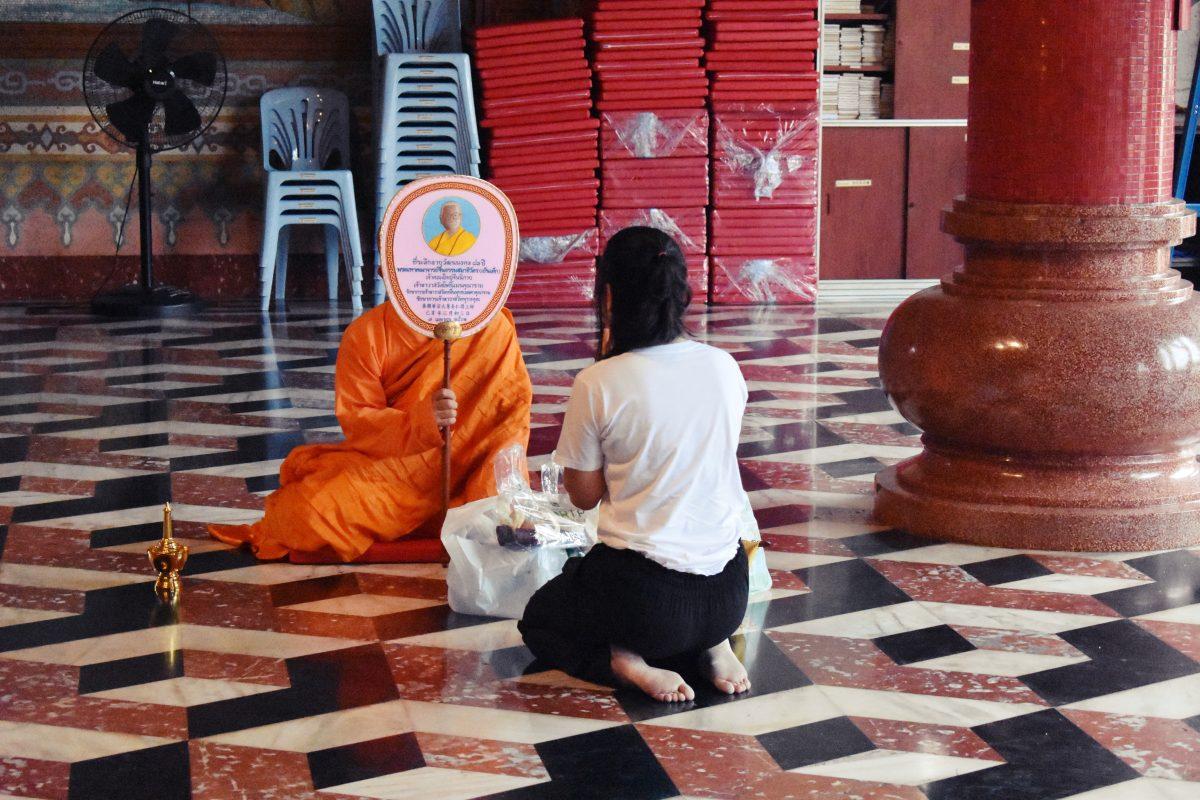 A monk listens to a prayer

Behind the Ubosot is a cloister with a trio of shrines. The central shrine contains a rare wooden multi-armed Avalokitesvara Guan Yin, the goddess of mercy. The stunning image is enclosed in a glass case along with several other Guan Yin images. Make sure you don’t miss this beautiful image. Unfortunately, the light shining on the glass case makes it difficult to see perfectly or capture a good image. 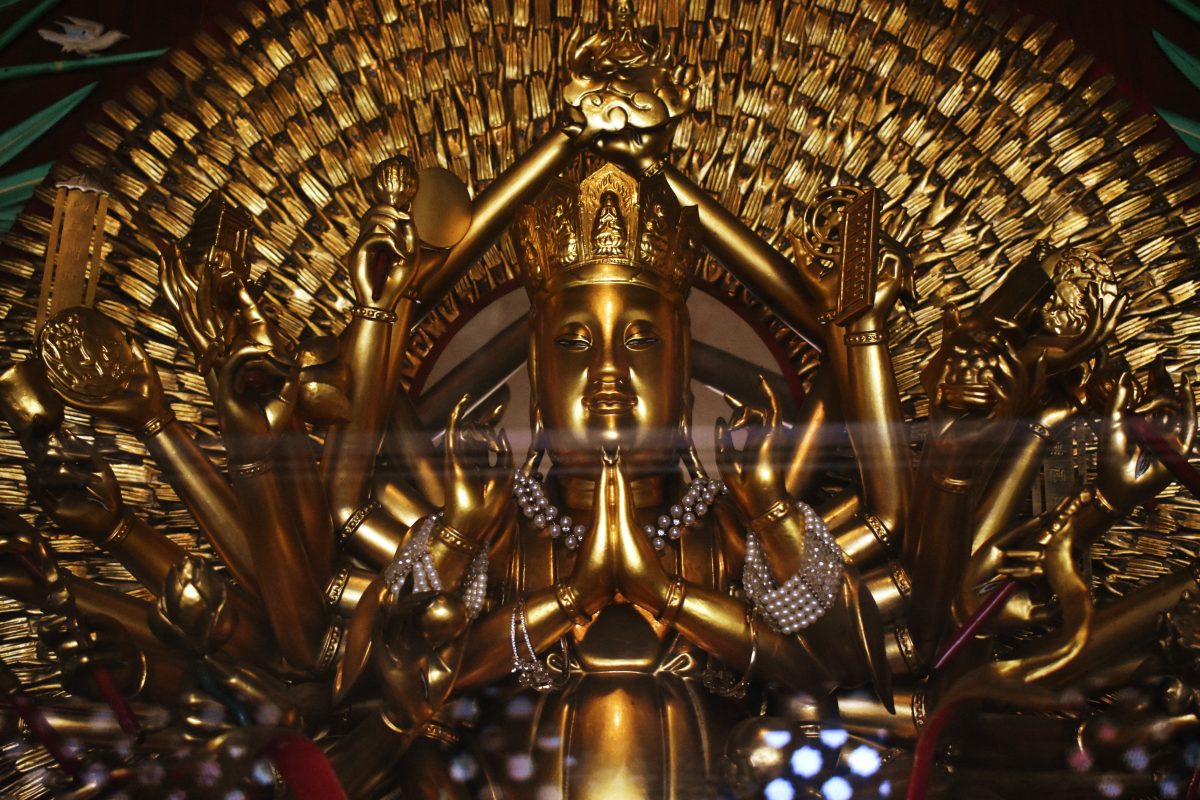 All around Wat Poe Man Khunaram is striking artwork and decoration with an attention to detail. Wat Pho Man Khunaram is a quiet and peaceful place and definitely off the tourist track. It’s a great place to meditate or spend some quiet time. It’s fairly central and easy to get to with buses and the BRT running close by. Just around the corner is Central Plaza Rama III with coffee shops and eating places. There is also a small community mall.

Where is Wat Poe Man Khunaram?

Getting There: BTS to Chong Nonsi Station. Head for exit 5. Take the BRT from here to Thanon Chan, or exit at Bangkok City Tower on to Naradhiwat Rajanagarindra Road and take a bus 162. Look out for Chatrium Residences on your right. Get off and cross the footbridge. Soi Wat Pho Maen will be on your right.