A Vietnamese Buddhist Temple in Bangkok

The Khanh Van Temple also known as Wat Uphai Ratbamrung is a colorful Vietnamese/Chinese style temple. Its on Charoenkrung Road in Bangkok’s Chinatown and built in the late 18th century. 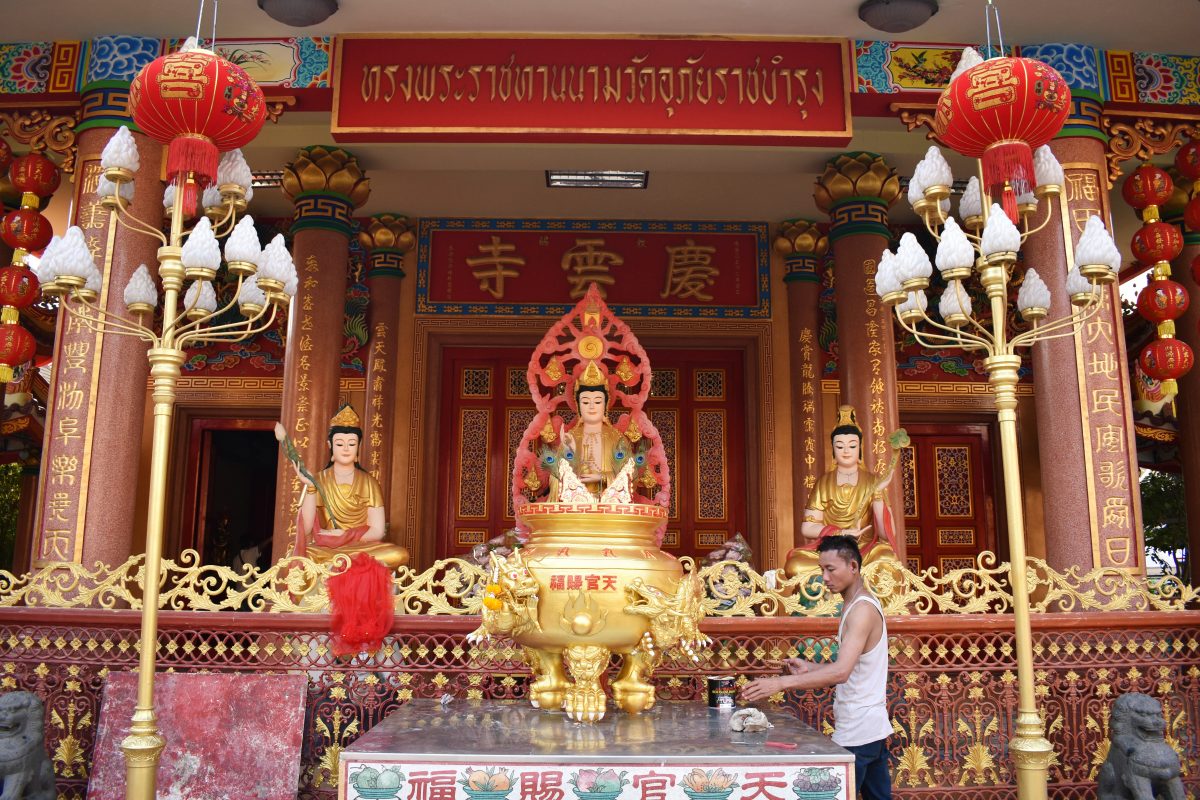 Wat Uphai Ratbamrung temple dates back to the late 18th century. A community of Vietnamese immigrants had settled in the area and received the land from King Rama I, the first king of the Chakri dynasty. The immigrants constructed the temple which was originally named Chua Khanh Van in Vietnamese. It was one of the first Vietnamese Buddhist temples in Thailand. 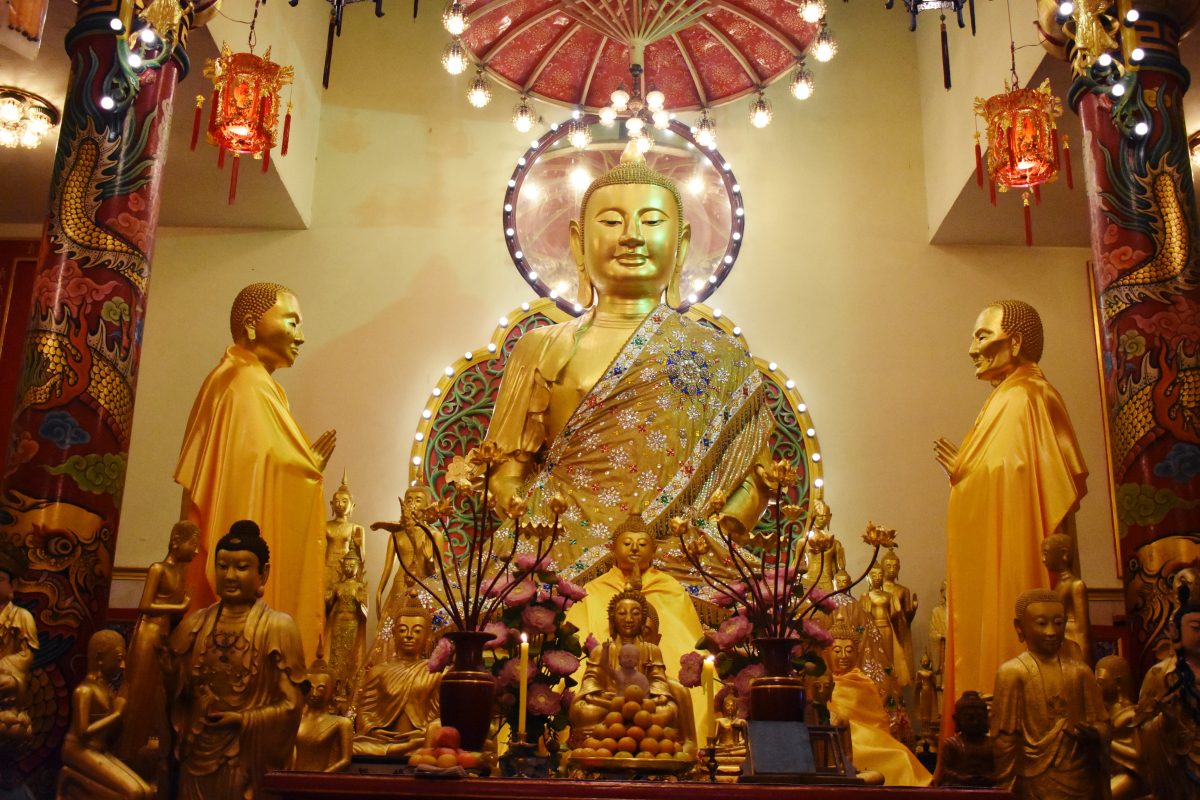 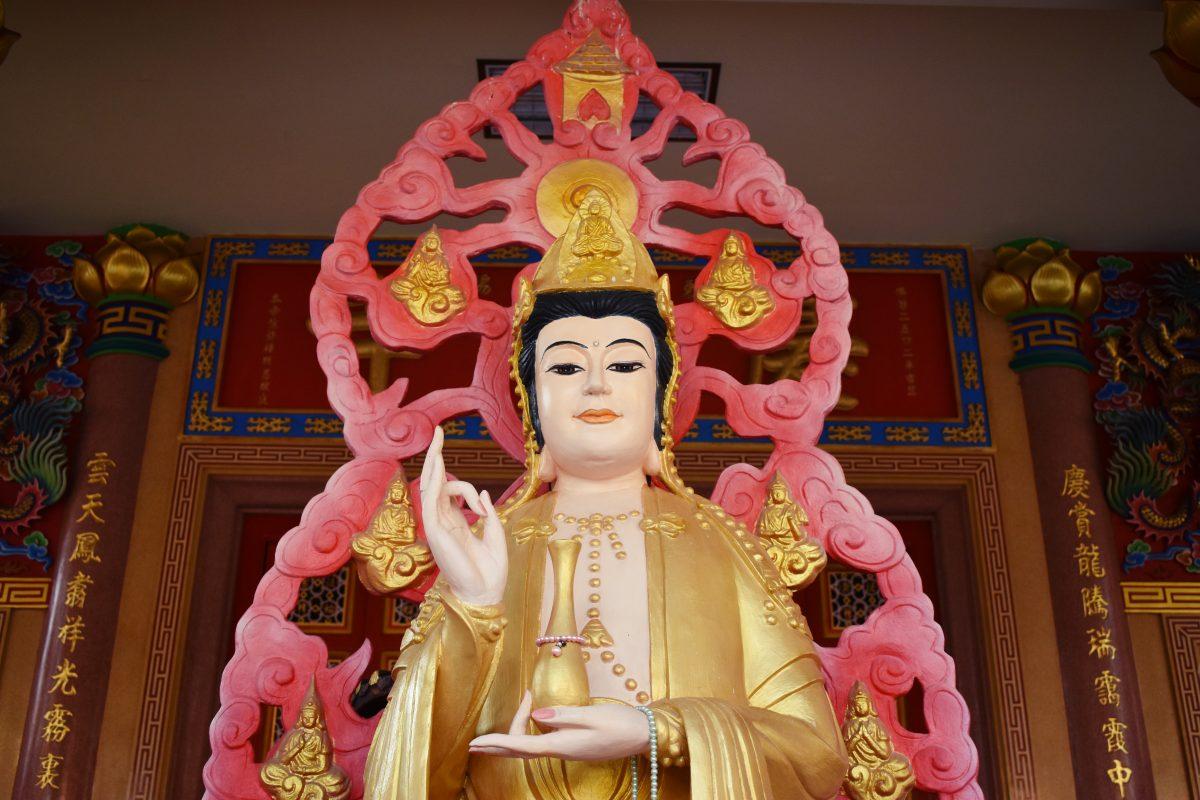 The temple entrance is on Charoen Krung road on the border of Talat Noi & Chinatown. The Chua Khanh Van sign is above the entrance arch which leads into the temple grounds. The main building sits back from the road. The terrace features a central statue of Guan Yin, the Chinese Bodhisattva, goddess of mercy, compassion, kindness & love. The central standing statue is holding a water jar, a Buddhist symbol of good fortune. Guan Yin has her two children Long Nue & Chan Tsi on either side. The image on the left sits on an elephant & holds a lotus flower. On the right, the image sits on a green tiger holding a willow branch. 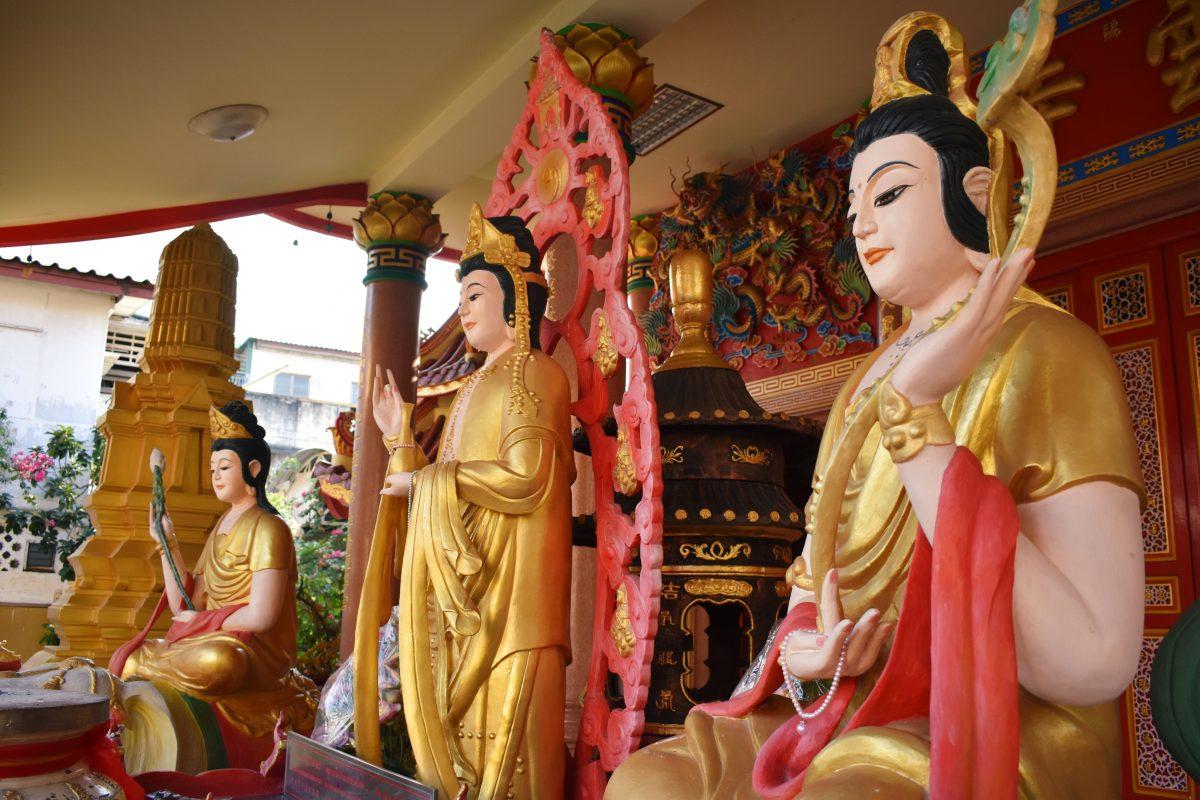 The gables, doors, & pillars are colorfully decorated with dancing dragons, fish & golden lotus flowers. Also on the terrace are small drum & bell pagodas as well as a mini golden chedi & prang. The doors to the ordination hall are flanked on either side by another Guan Yin image and a Chinese god. 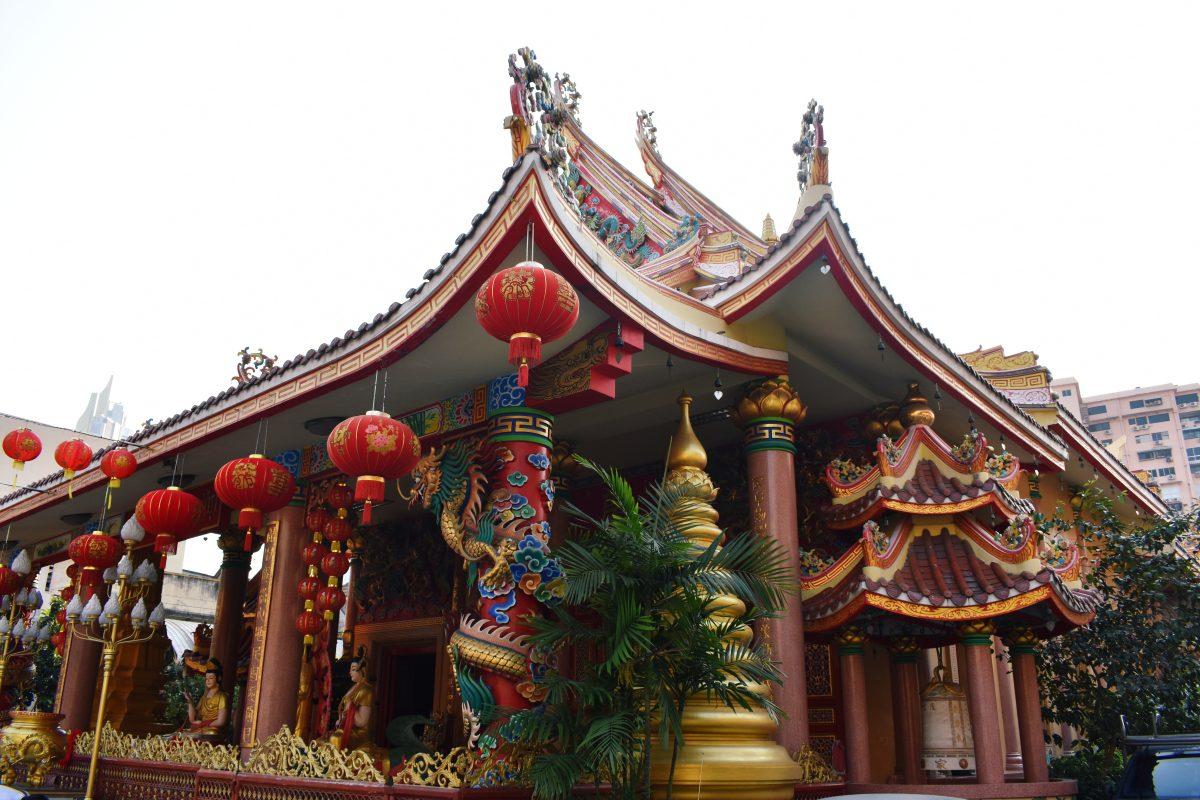 Inside the Ordination Hall is the impressive looking principal Buddha image Sakyamuni Buddha, flanked by two rare Chinese disciples. Also within you will find a Maitreya Bodhisattva statue, Bodhisattva Avalokitesvara and a Dharma Protector. The Ordination Hall is not always open and the best time to visit is during Chinese festivals when there are special ceremonies and the temple is colorfully decorated. The monks are mostly Vietnamese Thai and ceremonies and chanting are usually in Vietnamese.

Inside the courtyard of the Khanh Van temple, there is a large Bodhi tree which is over 100 years old. A small garden area has a pond and a dancing dragon diorama with an embedded small Guan Yin image. This “Dragon Wall” stops malevolent ghosts and evil spirits who apparently don’t like corners. Next to the Dragon Wall is a couple of plaques displaying Buddhist proverbs. To the side of the temple is a Khao Mo, a small hill made of rocks & stone containing miniature chedis, prangs & pagodas in different styles & sizes. There are also small pagoda shrines containing ashes and bones of people cremated at the temple. You will see their photos on the outside of the shrine. 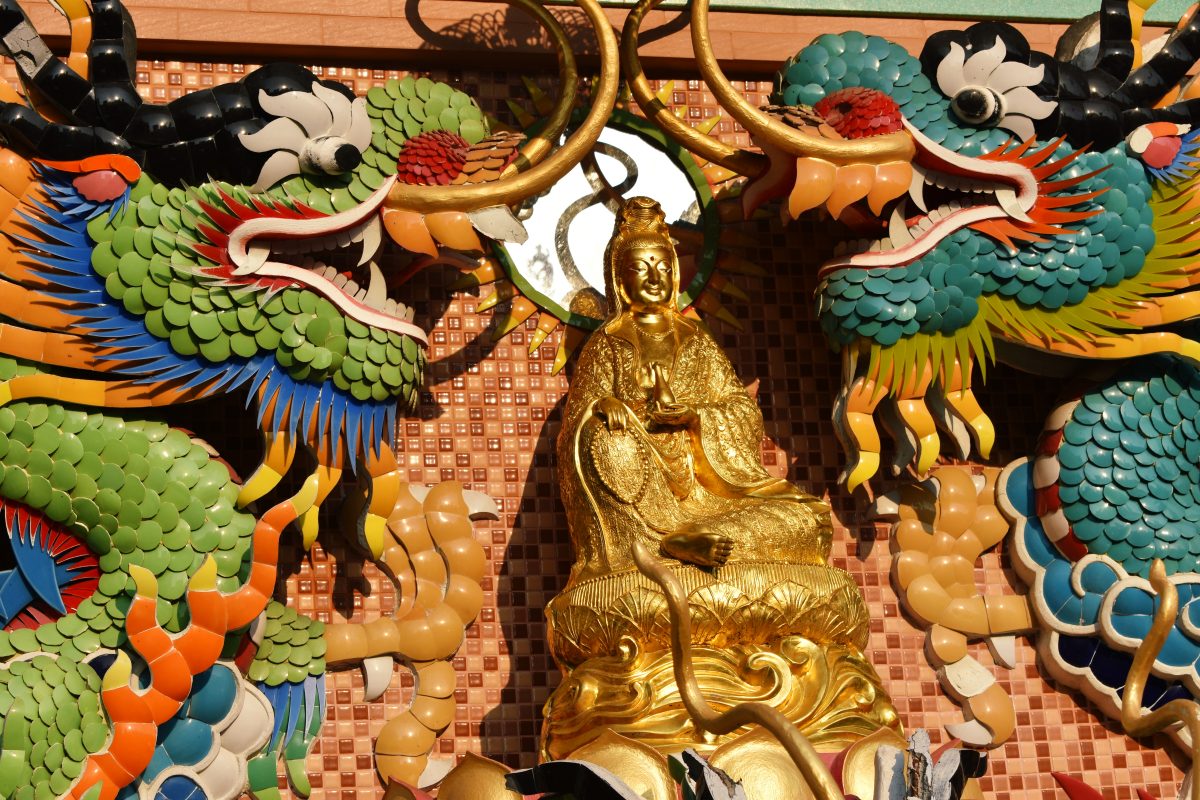 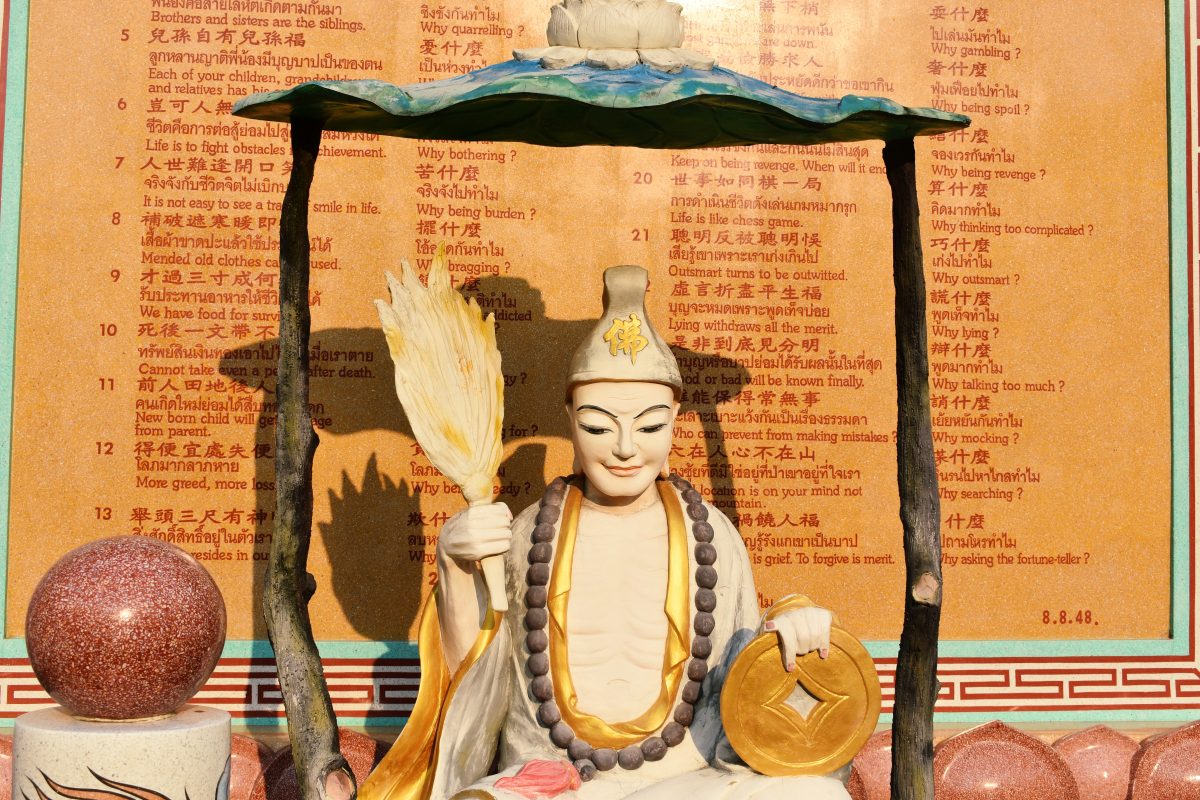 Opening Hours: The temple grounds are open all day. The Ordination Hall may or may not be open.

Getting There: MRT Hualamphong Station (exit 1). Cross the intersection and continue walking down Tri Mit Road turning left at the Chinatown gate into Charoen Krung Road. The shrine is on the right-hand side.

A Guide to Chinese Temples & Shrines in Bangkok

A Guide to Chinatown in Bangkok, Thailand.

A Walking Guide to Chinatown in Bangkok