The walk starts at Hualamphong Railway Station which is the main railway station in Bangkok. To get there take the MRT Blue line to MRT Hualamphong station, take exit 2 to bring you up inside the station. The station was designed by the Italian architects Mario Tamagno and Annibale Rigotti taking six years to build before opening in 1916. The pair had previously designed several other notable Bangkok buildings including Bangkhunphrom Palace and the Ananta Samakhom Throne Hall.

The architecture is in an Italian neo-renaissance style featuring decorated wooden roofs and stained glass windows. The station has become a Bangkok landmark and about 60,000 passengers pass through the station each day with trains departing for all parts of Thailand. The station is also the departure point for the famous Eastern & Oriental Express Luxury Train to Singapore. It is due to close in 2019 but will live on as a museum. 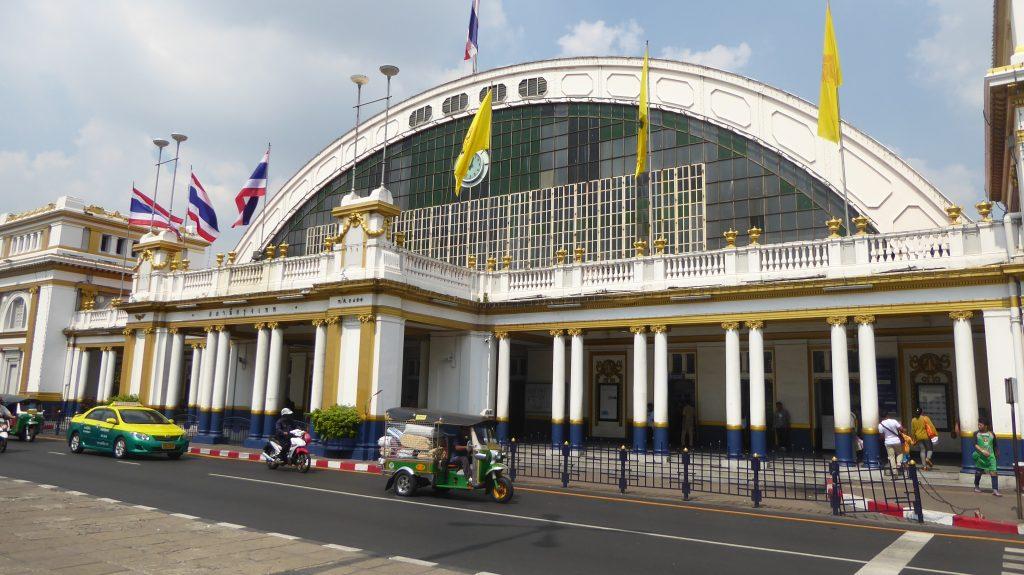 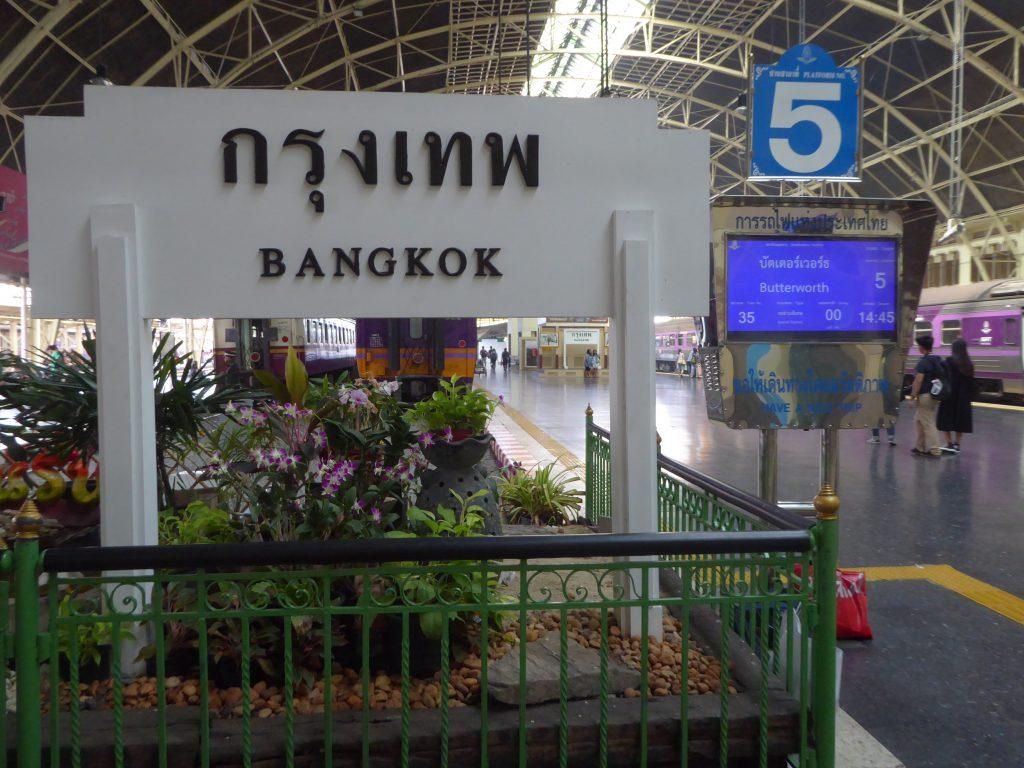 After leaving the station turn onto Rama IV Road crossing the intersection over the Krung Kasem canal. You will come to a three-way junction where you need to continue onto Traimit Road. On your right, you will come to Wat Traimit, the home of the famous Golden Buddha. 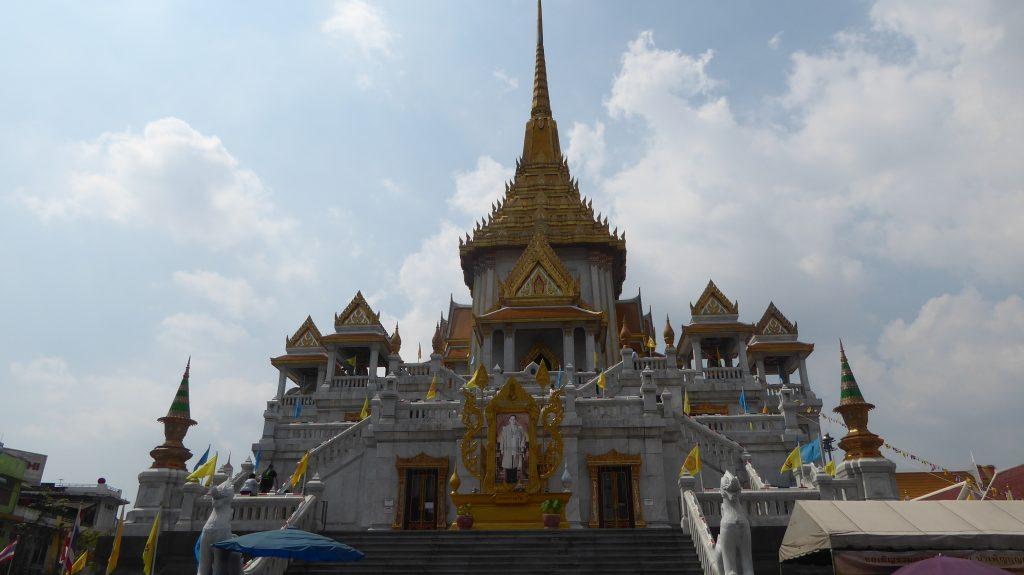 The Golden Buddha is the world’s largest golden Buddha image standing 3 meters high, weighing 5.5 tonnes and made from 18 karat gold. The gold is estimated to be worth 250 million dollars. The images official name is Phra Phuttha Maha Suwanna Patimakon and it is believed to date from the 13th-14th century Sukhothai Kingdom. 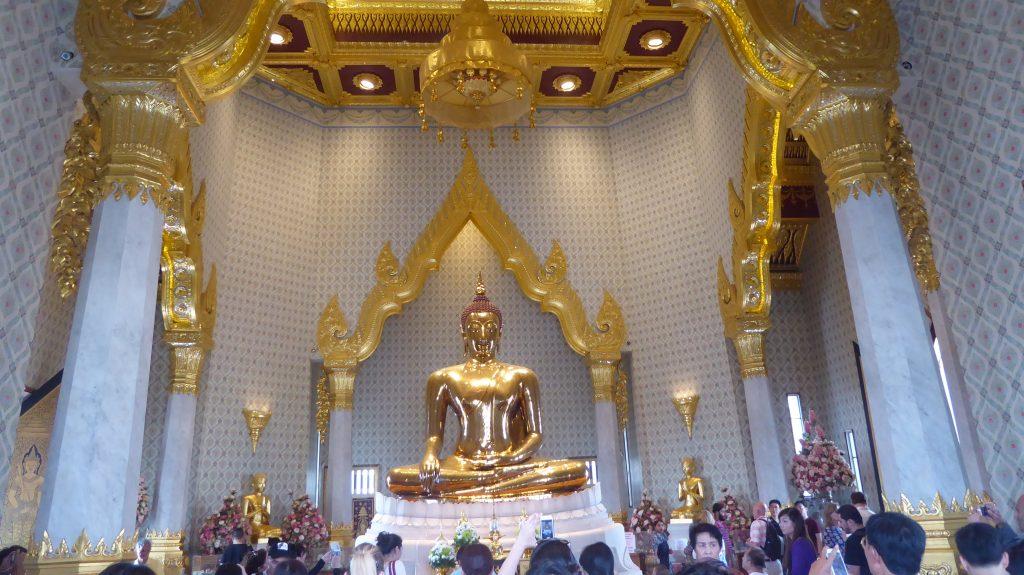 Turn right when leaving Wat Traimit and you will see the Chinatown Gate sitting on a traffic island in the middle of a roundabout named the Odeon Circle marking the entrance to Chinatown and the start of Yaowarat Road which is the main street running through the heart of Chinatown. The gate was built in 1999 in celebration of King Rama IX’s 72nd birthday and was designed by a Chinese artisan. Its prominent feature is two large dragons on the top of the archway raising the royal crest. 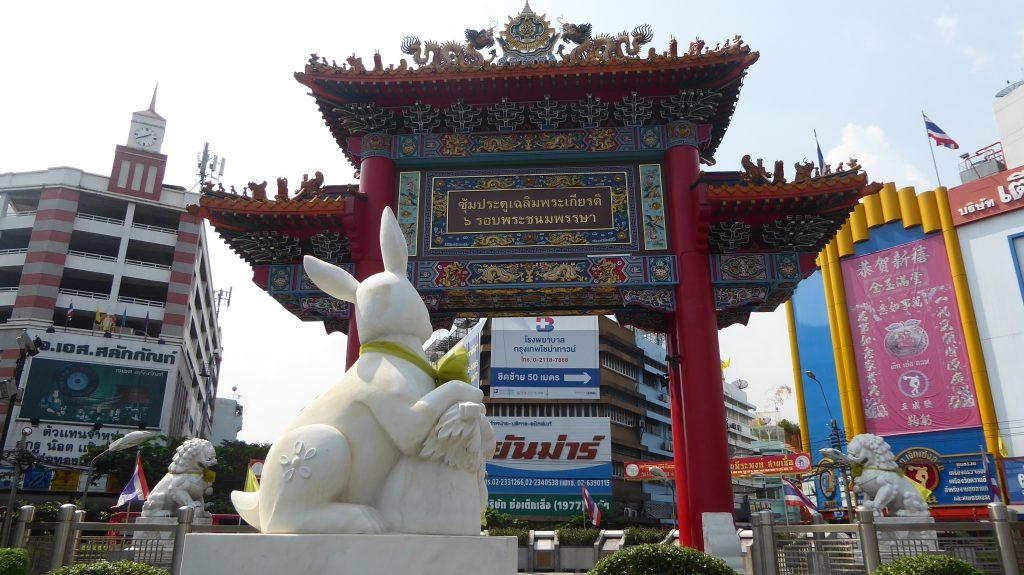 In the courtyard is the Guan Yin Shrine. The principal image is Avalokitesvara Bodhisattva made from sandalwood and believed to be 800-900 years old. The image is originally from China and was brought to the shrine in 1958. People come to pray at the shrine to ask for good health and to be cured of illness. 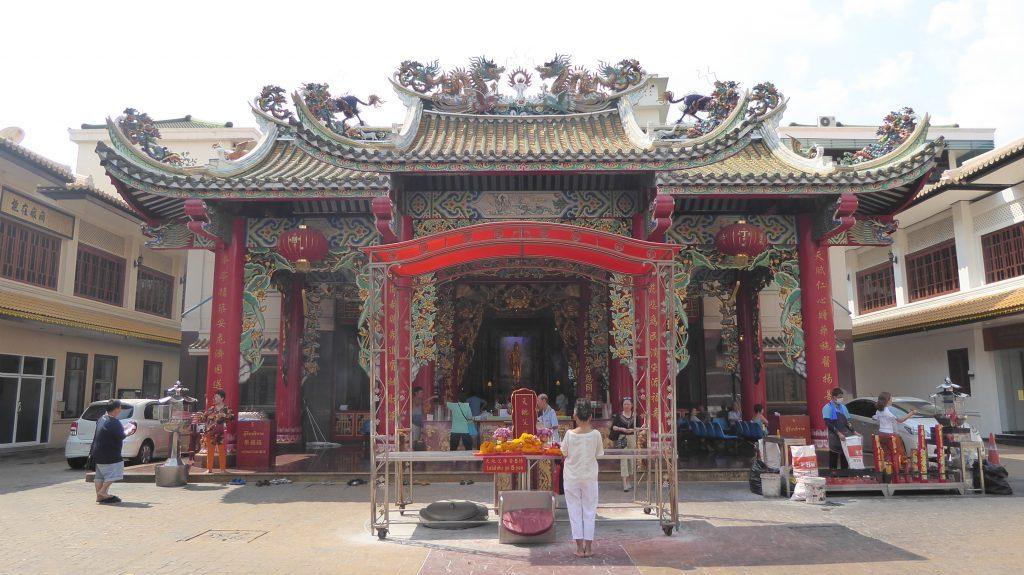 Continuing down Yaowarat Road you will discover the commercial center of Chinatown with numerous restaurants, traditional coffee, and tea houses, gold shops, hotels, traditional medicine shops, ceramic shops and shops and stalls selling souvenirs. Branching off Yaowarat Road there are several market areas and side streets selling all kinds of goods. 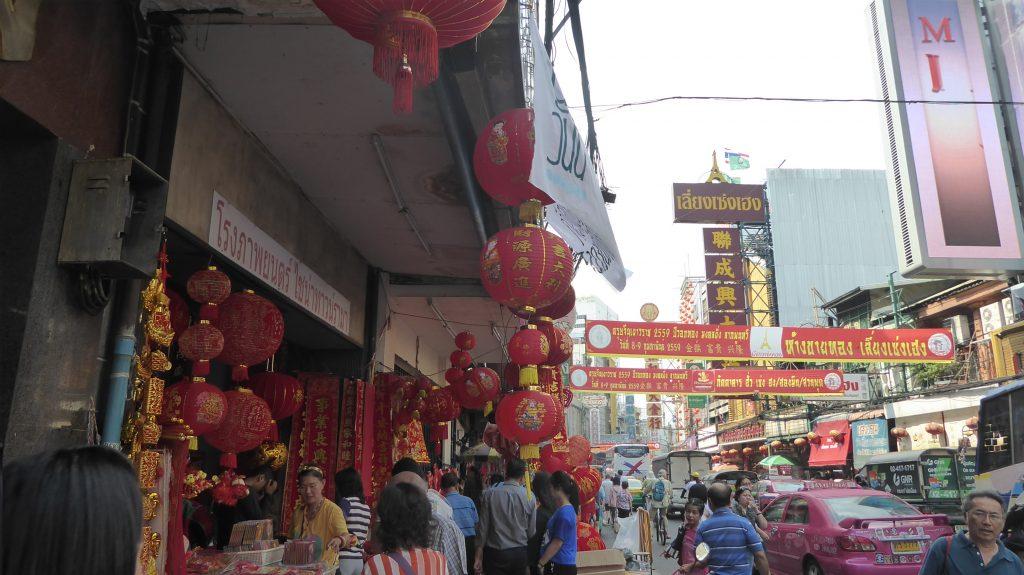 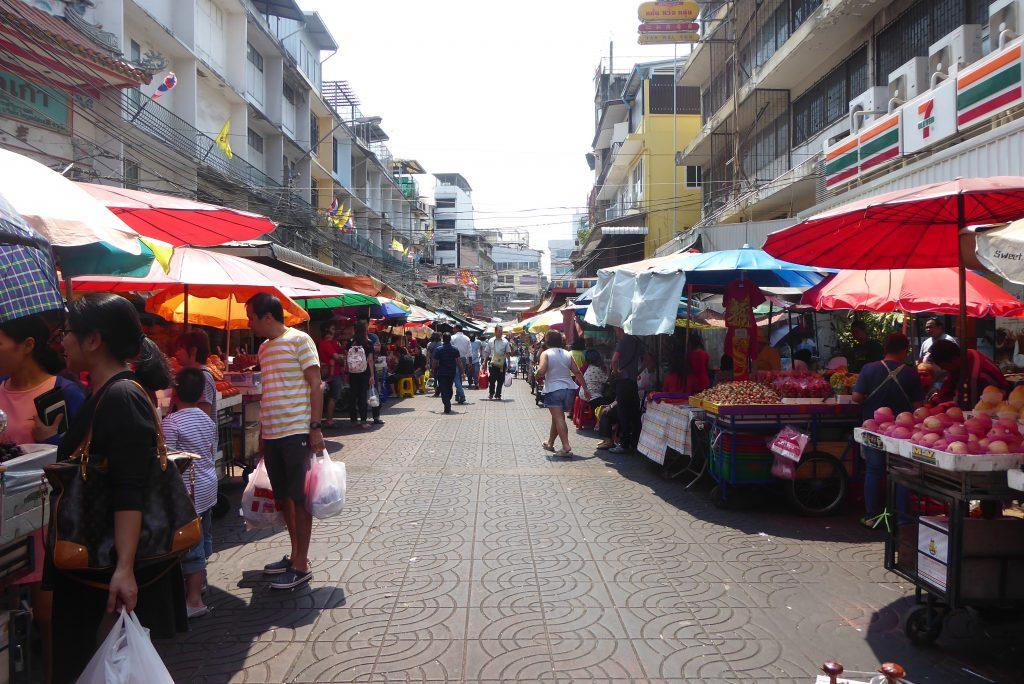 The more interesting part of Yaowarat Road finishes at the Ratchawong Road intersection. A left turn here will take you down to the Ratchawong Chao Phraya Express Boat Pier. To your right at the intersection is the Grand China Hotel.

Cross the road here and turn back up Yaowarat Road before turning left into Yaowarat Soi 8 (Tao). On your left, you will come to Wat Bampen Chine Prote a Buddhist Chinese temple which is one of the smallest in Thailand and dates back to the early Rattanakosin period. The temple is built in a Chinese style and has Chinese monks. There are several important Buddha images inside. The temple is open for visitors from 06.00-17.00 daily.

Walk back down Soi 8 to Yaowarat Road and turn left onto Mangkon Road. On your left opposite Tesco Lotus, you will come to Wat Kanmatuyaram a temple which dates back to the reign of King Rama IV and is currently under reconstruction though you can still see the Sri Lankan style upside-down white bell-shaped chedi as well as a shrine to Guan Yin. 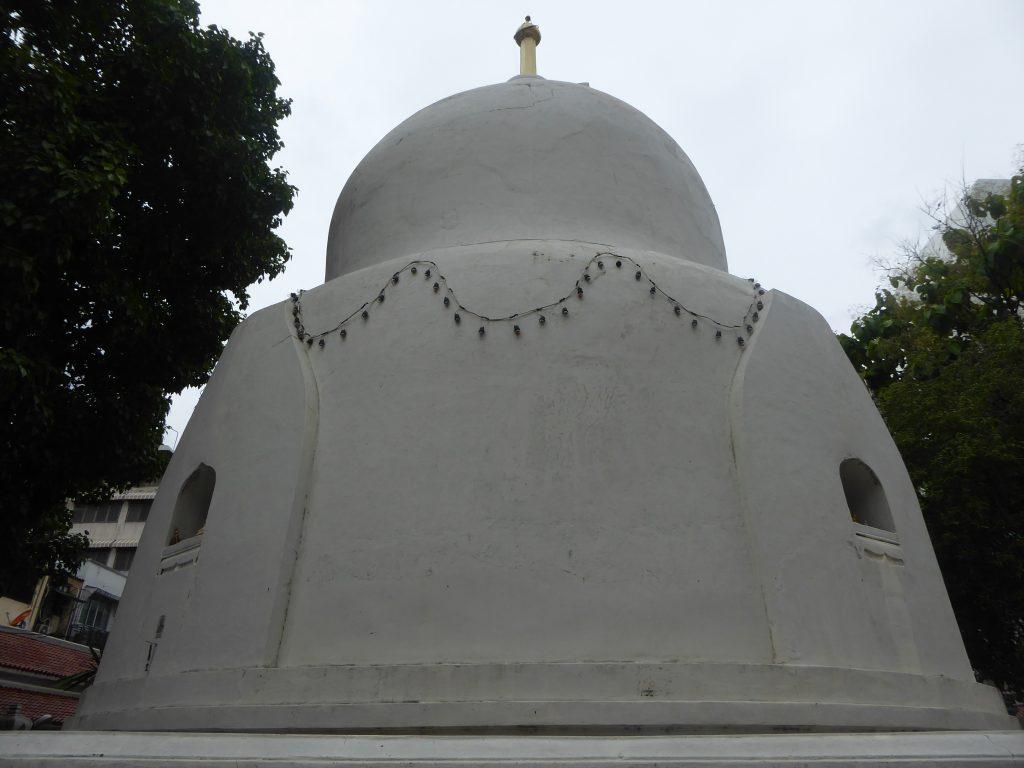 The Chedi at Wat Kanmatyaram 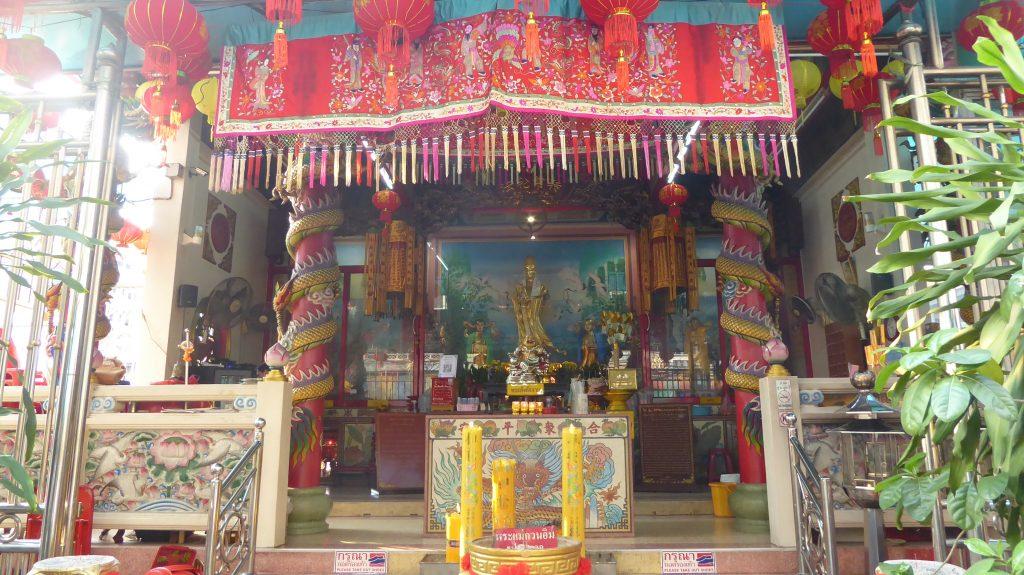 Continuing up Mangkon Road turn right onto Charoen Krung Road and you will see Wat Mangkon Kamalawat on the opposite side of the road. It is accessed through an archway leading to a courtyard set back from the road. The temple was built in 1871 and is in the Southern Chinese architectural style of Taechio. Its the largest and most important Chinese temple in Bangkok.

Inside the main entrance, you will find four large guardian images (Chatulokkaban), beyond which is the Ordination Hall containing three main Chinese style Buddha images behind an altar. Elsewhere in the temple, you will find more Buddha images and shrines dedicated to various Buddhist, Taoist and Confucian deities as well as Chinese gods and goddesses. The temple is open from 09.00-17.00. 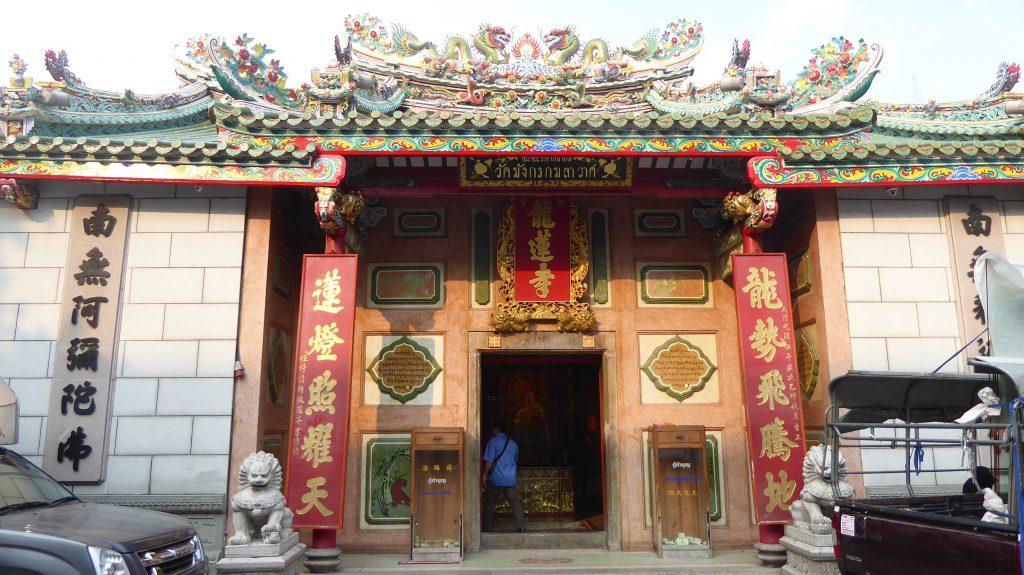 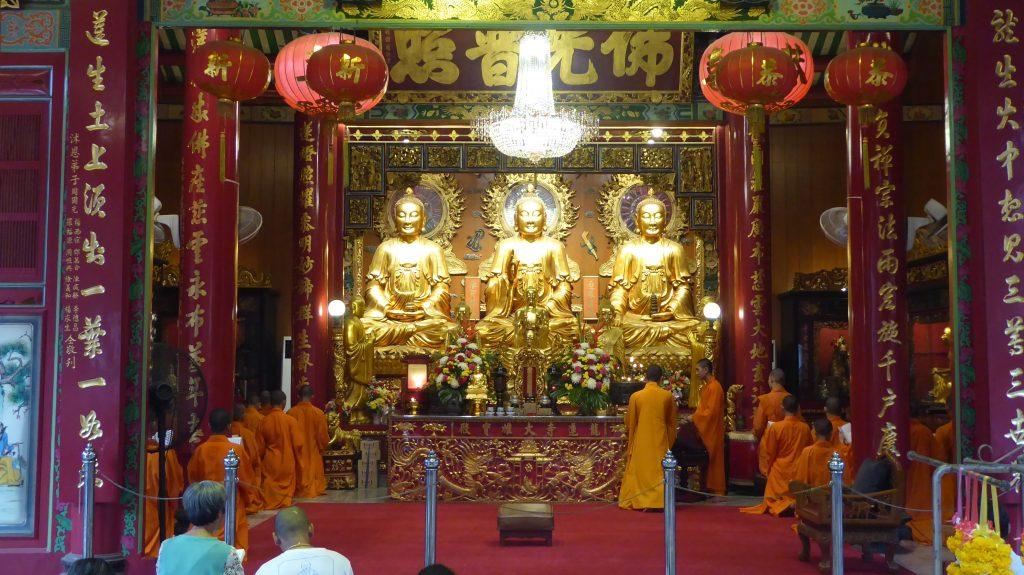 After leaving Wat Mangkon Kamalawat, cross the road and continue walking up Charoen Krung Road before turning right into a narrow alley lined with market stalls called Itsara Nuphap. As you walk down the alley you will come to our last stop, the Leng Buai La Shrine which will be on your left.

The shrine was originally an ancient Tae Chew shrine built in 1658 in a traditional Chinese architectural style and is reputed to be the oldest Chinese shrine in Thailand. The rooftop features two stuccoed dragons facing each other while the columns are encircled by two more dragons. Inside in the center is an altar in front of images of Leng Buai La and his wife. To the left is an image of the Gong-Wu deity while on the right is the Queen of Heaven. There are also other rare objects including an ancient Ching dynasty bell. 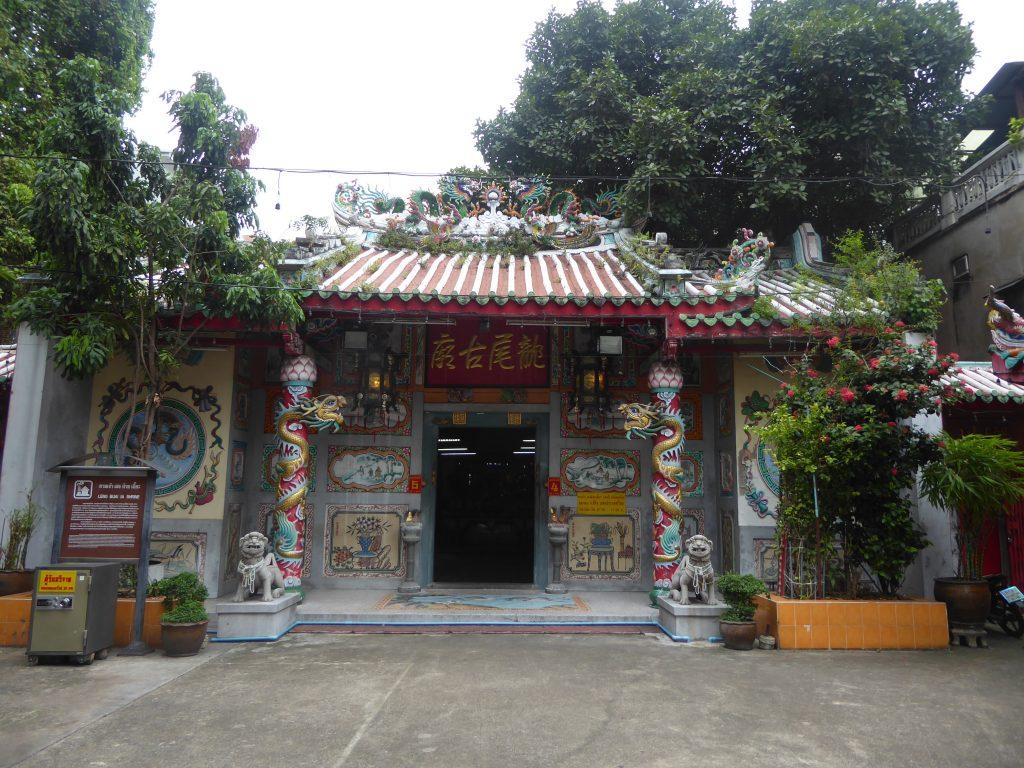 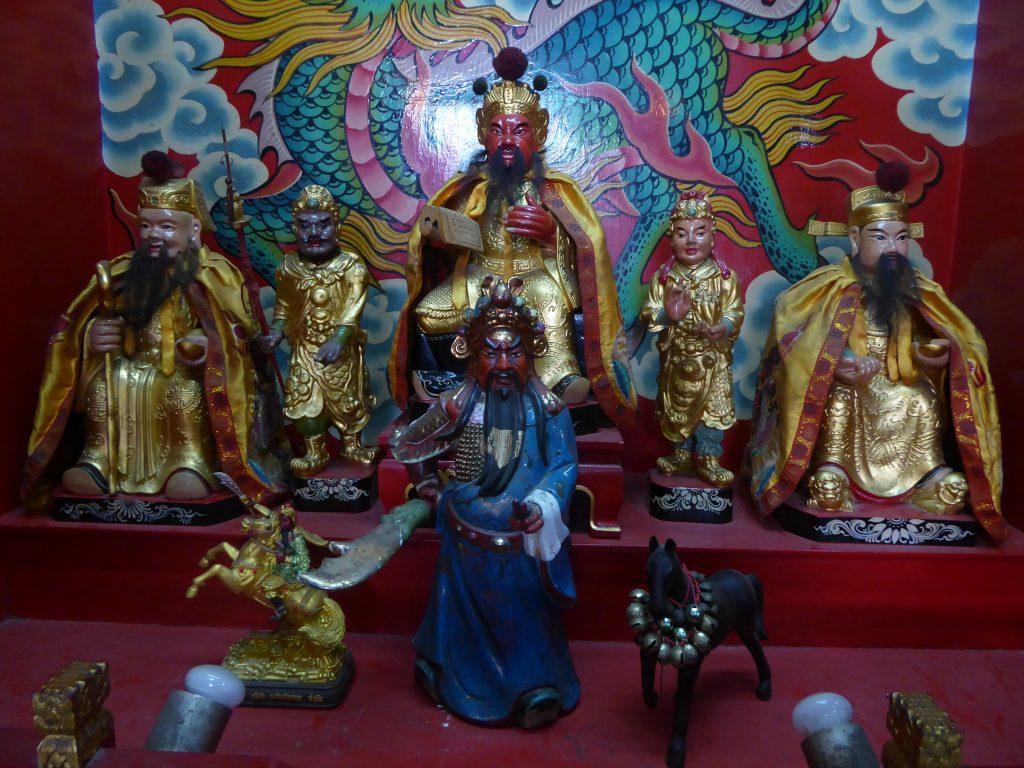